The Deepdale Duck made a long-awaited return for our pre-season friendly against Bolton Wanderers at the County Ground.

Our mischievous mascot made the short trip to the Lancashire FA Headquarters and was well-received by fans of both sides after being absent since the Coronavirus pandemic first struck last year. 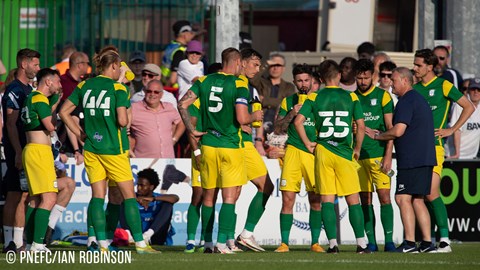 The Duck met Josh Harrop and Alan Browne watching on from the stands ahead of the game, paid a visit to the press box to Lancashire Post reporter Dave Seddon, and was at long last able to mingle with his beloved fellow Preston North End supporters once again.

Simon Nash is the long-serving man behind the mask in his role as Deepdale Duck, on matchdays and representing the club at community events, and was delighted to get back into the costume – despite the soaring heat in Lancashire – for the first time in so long.

Simon said: “I really enjoyed getting back to my mascot duties for the Bolton Wanderers fixture and meeting fans for the first time in around 17 months.

“It has been a long time since I last saw the fans at a game, which was against Queens Park Rangers in March at Deepdale last year!

“I’m looking forward to returning to Deepdale as mascot during pre-season and throughout the new season to cheer on Frankie McAvoy and the boys!”

Remember to watch out for the Duck on home matchdays from one hour before kick-off when the Championship campaign begins next month.