Joe and Oliver Martin have developed significantly by being enrolled on Preston North End Community and Education Trust’s Goals mental health programme, which has harnessed the same passion for football that they demonstrate in the club’s season card promotional video to support them with their mental wellbeing.

In the video, Joe and Oliver are seen playing football in the streets surrounding Deepdale before heading inside the stadium, as two of the 12 individuals featured in the campaign who have all been positively impacted by the Trust’s work since the start of last year.

Preston North End Community and Education Trust is the club’s official charity (no. 1130773), delivering projects centred around Community Engagement, Education, and Health and Wellbeing, while utilising the power and appeal of the club and football as a whole to create safer, stronger and more resilient communities.

Joe first enrolled on the Goals mental health programme in September 2019, following his referral to CAMHS [Child Adolescent Mental Health Services] after losing his father to suicide the previous year, while his younger brother Oliver was enrolled onto the programme soon after in February 2020.

He and brother Oliver have since accessed unique opportunities from Preston North End as part of their development plans to build their confidence, communication, leadership and resilience.

With Preston North End being their local EFL club, Joe’s and Oliver’s mother Jenny sent an email to the club to enquire about how the Trust could support them with their mental health, as part of the EFL’s partnership with mental health charity Mind. That led to Joe meeting with Deputy Chief Executive of the Trust Harriet Creighton-Levis, who met with Joe at his school to draw up a unique development programme to support his mental wellbeing.

Having met the first team squad – Joe on two occasions – the brothers have a heightened level of respect for the players, particularly Declan Rudd for the role he has played in their development, for the time they have taken to speak to them during their visits to the club’s training facilities.

“It feels much more like home than any other stadium,” Joe said of Deepdale. “We are there a lot, a lot of stuff has happened there; meeting Harriet, we have our photo on the wall with the quote [in the community offices], things like that. 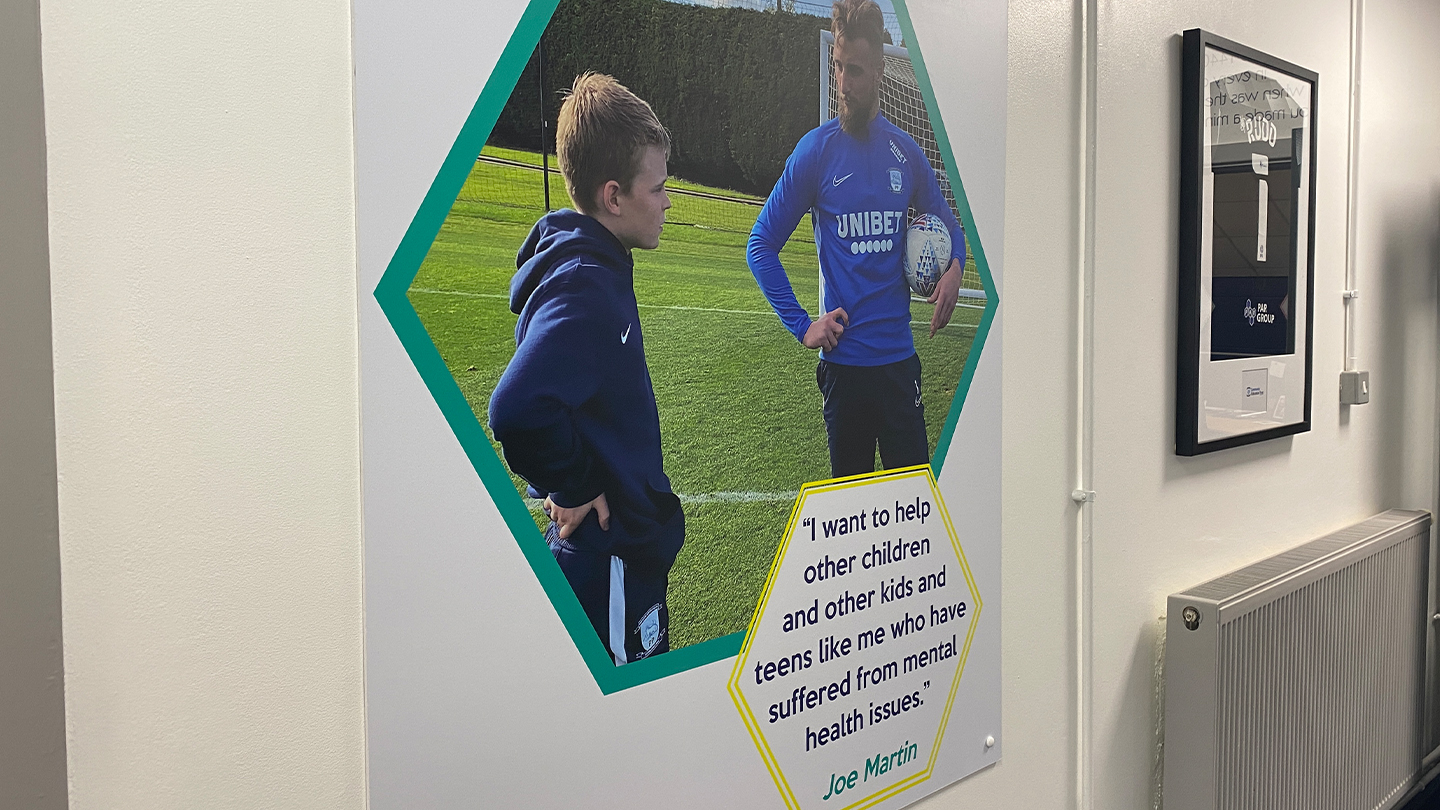 “When you go there, you feel secure because you know people. I can’t wait to get back to another game, it will be a great feeling.

“Beforehand, we followed Preston because it was the closest club to us in the EFL. We will sit down and watch Preston play. It’s mad to know that we’ve seen the players. You reflect on how much the club has helped us.”

As part of the mental health programme, Joe has assisted with the co-ordination of the half-time penalty shoot out on home matchdays, volunteered as a coach on the Trust’s half-term soccer school camps.

The brothers’ visits to the first team training facilities, in which they have met the players, also led to the start of their friendship with Declan Rudd, who has stayed in touch with Joe and Oliver in an online capacity since the pandemic struck as well.

Those experiences have allowed Joe to remain positive and given him plenty of opportunities to look forward to, that have all supported his development.

“There are a lot of different things I’ve done that have helped me, such as coaching,” Joe continued.

“It has all helped me in different ways and with different aspects of my life. The whole programme in general has given me things to look forward to. If I’d had a bad day at school, I could think, ‘I’m going to do this with PNE next weekend’. Confidence helped with half-time penalties and stuff like coaching helped me.

“Meeting Declan and the relationship I have built with him makes me smile to this day. When I think about it, it makes me really happy.

“I had a massive fear of crowds, and I’ve completely got over that. Meeting new people was something I hated, and coaching, I had to meet a lot of children  and coach them, which is a lot harder than meeting an adult or someone my own age.”

It has also been to clear to Oliver that his older brother has developed greatly thanks to the Goals programme.

“Joe has come a long way. I remember years back, we’d turn up at football training and he didn’t want to get out of the car because he didn’t like to meet new people

“Recently, Joe has met a bunch of new people and did some coaching in Preston. He looked like himself the whole day around new people, which was something I’d never seen in him before, and I thought that was brilliant.”

Joe and Oliver will be undertaking a 72-mile cycling and walking challenge in aid of the Trust next month, in an effort to give something back to the Trust in return for the support they have received for their mental health – aiming to raise £720.

To support Joe and Oliver with a donation for their challenge, please click here, or to read more about their fundraising plans, click here.

View all of our season card campaign feature articles in one place by clicking here.