Like all those who feature in the club’s season card campaign, mother-daughter duo Laura and Carly Milner have a close link with Preston North End Community and Education Trust – accessing several of the Trust’s programmes both before and after the Coronavirus pandemic struck.

Laura is a lifelong supporter of Preston North End, following in the footsteps of her father and grandad – just like her partner Richard, a fellow long-term and passionate supporter, leading to them attending matches together and later bringing their children, Luke and Carly, to Deepdale.

Their love of Preston North End has led to their family’s involvement with PNECET on several projects and initiatives, most recently with the Communities United programme, which began at the start of 2021, bringing ten families of various backgrounds and nationalities together every Monday night on Zoom.

Laura and Richard, together with their children Luke and Carly, were one of those families, participating in sustainable social integration and meaningful civic participation activities to learn more about other family’s backgrounds, cultures and experiences of living in Preston.

An emphasis was placed on a different family’s culture each week, with PNECET staff even delivering ingredients so that families could cook meals that were representative of different people’s backgrounds, with participants then sharing their thoughts about the various cultural foods during the Zoom sessions.

Communities United allowed Laura and her family the opportunity for social interaction during the lockdown period earlier this year, when people were unable to leave their homes, while continuing their close connection with the Community and Education Trust.

“Richard and I really looked forward to our Monday nights, it was really dynamic as you got to meet people you wouldn’t usually,” Laura said of her family’s involvement in the Communities United programme.

“It was really fun being in a group like that, we all joked together really well. Everyone had an association with the club in one way or another, with either the community itself or taking part in one of the programmes.

“At the time, we couldn’t go out and meet friends in lockdown, so it was something that we constantly looked forward to. 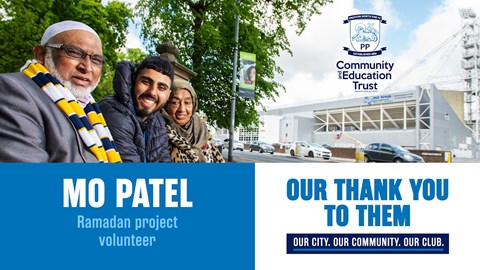 “With it being online, it probably created a bit of a safe space to allow people to talk more openly online.

“I think when you first start, everyone is a little apprehensive not knowing each other much. However, as the programme went on, we all became more comfortable with each other.

“There was one particular lad on there who was quite shy at the start, but as the programme continued, he became very talkative, which was great. It was nice to see the change in people. It was just great to meet people from all different walks of life.”

Before becoming involved with the Trust, Laura and Richard met through their shared love of Preston North End, which has been passed onto their children Luke and Carly, who have also been able to access other PNECET programmes, including the regular half-term Soccer School camps and PNECET Wildcats, a football programme for primary school girls.

“Before we met, my husband and I were already season ticket holders,” Laura continued. “It has always run through both of our families. It has come from both of our dads and grandads; we have been really lucky as we both love football.

“My first association with the club’s community came from the North End Soccer School and then my daughter Carly taking part in the Wildcats programme,” said Laura. “I became aware of that from coming to games.

“We took Luke on to games from a very young age as he has always had a love for football. With Carly, it has just grown on her. Initially, it was just for fun attending the Wildcats programme, but now she does enjoy watching football.”