Patrick Bauer and Emil Riis joined Preston North End Community and Education Trust’s latest Communities United meeting via Zoom to share their experiences of growing up in Germany and Denmark and more about their respective cultures.

Communities United is a programme in which ten families of various backgrounds and nationalities meet every Monday night to take part in sustainable social integration and meaningful civic participation activities, to learn more about one another’s cultures.

The programme allows the participating families to learn more about each other’s experiences of living in Preston, while gaining an increased understanding about cultures different to their own. 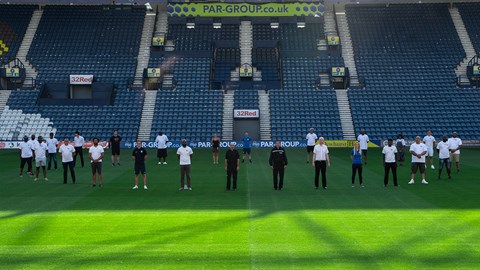 Bauer and Riis joined the latest meeting, which allowed the families to ask the PNE duo a range of questions, including the chance to reflect on their own cultures and how they differ to life in England.

They revealed more about some of their favourite foods from their homelands as Bauer spoke of cooking a German Schnitzel and stocking up on cultural food from LIDL, and Riis admitted to missing his mum’s food from home. The two also spoke of a shared appreciation for Danish yoghurt and cereal!

PNECET Head of Community Engagement Rebecca Robertson said: “It was a real pleasure to have Patrick Bauer and Emil Riis involved in our latest Communities United meeting where they spoke about their own cultures with our participating families.

“It was really interesting to hear about their backgrounds from Germany and Denmark and some of the foods and traditions that they enjoy in their homeland, as well as giving our brilliant families the chance to ask them some questions about their lives as footballers.

“We have many different families participating on the programme of a variety of nationalities and backgrounds, speaking a range of languages and some of the participants even joining us with the support of an interpreter.

“We have been focusing on a different family’s culture each week, sometimes even cooking meals that are representative of that culture, which our participants have then later shared their thought about those meals and foods in our Zoom meetings.

“It was brilliant to have two more new cultures to discuss with Patrick and Emil’s involvement and we’re really thankful to them for joining the meeting!”

The Communities United programme has seen the Trust deliver a variety of goods to the participating families each week, including sweets of a Pakistani and South Asian origin, ingredients to cook the South African ‘Bunny Chow’ curry, and much more.

All the families have also received a Samsung tablet to allow them to take part in the meetings and remain engaged with the programme in an online capacity.

PNECET was one of six EFL clubs that has been supported with the government ‘Faith, Race and Hate Crime’ grant to deliver the Communities United programme.

For more information about Communities United and other PNECET provision, please email community@pne.com.