Midfielder Olivia Hooper applauded the efforts of all of her team-mates as PNE Women held league leaders Blackburn Community Sports Club to a 1-1 draw on Sunday.

The Lilywhites went behind early on at Penwortham Priory Academy but responded well with a Lucy Swift goal just before half-time enough to earn them a point and keep up their own run of impressive form.

Speaking to PNE.Com post-match, Olivia said: “I’m so happy with the team’s performance. 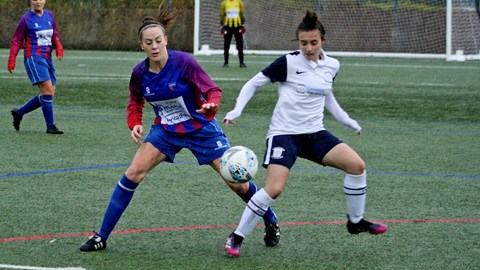 “We have been putting in the work behind the scenes at training and I think it’s really proving with the results recently. One of the biggest things I think we can take away from this game is our mindset and positivity throughout.

Olivia admitted that the team might have come away with an even better result had they put more of their chances away, with the midfielder among those to have chances on goal.

“I had a lot of chances, but I also think as a team we had a lot more chances than they did too. It’s always a positive and negative thing to think when we are creating so many chances, it means we’re getting forward well, moving the ball well, and creating all these chances now we just need to look at putting them away.

“Their goalkeeper came up big for them a few times with some important saves to keep it 1-1 but I can’t fault anyone.”

The midfielder suggested the Lilywhites can also look at creating more chances in behind the opposition defence as a means of improvement going forward.

“We’ve been improving with that [taking chances] every week so now I feel that we just need to keep grafting as one and work on keeping possession of the ball and our link-up play, with small triangles and drawing the opposition out to create better chances in behind for our forwards.

“We can definitely hold our heads high after this performance though and live in the moment after facing a strong side and, in some aspects, out-playing them for a long stretch of the game. It puts us in a great position for next weekend too as we have an away game.

“I’m looking forward to continuing on with the team and improving week after week.”