An early goal from Rachelle Smith wasn’t enough to help PNEWFC advance to the next round of the Lancashire FA Women’s Challenge Cup as the Lilywhites lost 6-5 on penalties following a 1-1 draw after 90 minutes.

Remembrance Sunday saw PNE travel to Wigan Athletic Ladies, with Smith’s early goal seeing the visitors in front right until the death, when Wigan equalized in second half stoppage time.

The Lilywhites got off to a strong start; less than two minutes into the game, Smith came close with her shot going just wide.

Centre back Courtney Woodhead found herself in acres of space allowing her to run from box- to-box with the ball at her feet but was unable to find an end product for her team.

Although the Lilywhites seemed to settle into the game quickly it wasn’t much longer until Wigan did the same and the Lilywhites’ defence had to be on their toes for much of the game.

Courtney MacPherson made a fantastic last-minute clearance to keep Wigan from getting the opening goal of the game.

In the 19th minute, midfielder Olivia Hooper’s shot from outside the box was parried by the Wigan goalkeeper and the ball fell to Smith on the left hand side of the 18-yard box and she skillfully placed the ball over the goalkeeper’s head to find the right-hand side of the goal.

Having edged ahead, the Lilywhites seemed to have the upper hand as they worked the  ball well in and out of gaps they created all over the pitch. While all the pressure was being applied by PNE, their defence were called into action when Ella Radcliffe pulled off a perfectly timed slide tackle in the box to prevent Wigan from getting on the scoresheet.

MacPherson later found a good amount of space down the right-hand side of the pitch but was fouled before being able to exploit it. Her free-kick delivery was cleared, only to land back at her  feet, and her attempted cross found Liv Askam’s head perfectly, but her effort was just off target. 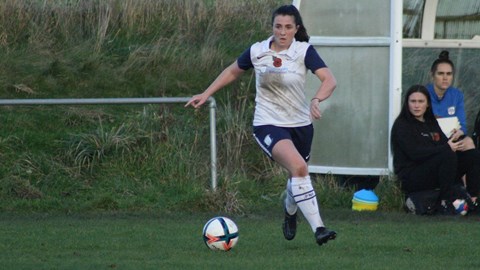 Askam had another chance just before the break. After weaving her way through the Wigan backline, her shot looked destined for the back of the net, but the ball didn’t quite drop in time and went just over the crossbar.

The second half started almost the same way the first half ended. The ball quickly fell to Askam again as she found space to get another shot off, but again she was just off target.

With a lot of the action coming in the first half falling on the attacking side, the second half seemed to fall more on the Lilywhites defending and trying to preserve the one-goal lead.

The battle in the middle of the park was where the ball seemed to stay for the majority of the second half with neither team able to find a way to break down the opposition and break through on goal.

Late on, the Lilywhites’ hard work throughout the second half looked set to pay off. However, Wigan had other ideas.

Applying plenty of pressure to the backline, PNE were unable to clear the ball and Wigan finally got a shot off that was just out of goalkeeper Liv Neal’s reach to find the back of the net, deep into stoppage time.

That forced a penalty shoot out to determine a winner, and while the Lilywhites’ first five takers – Katie Woodhead, Olivia Hooper, Courtney MacPherson, Olivia Askam and Rachelle Smith – all converted from 12 yards, Wigan maintained their 100 per cent record from the spot as the visitors unfortunately missed their first kick in sudden death to bow out of the competition.

First Team Coach Nigel Greenwood discussed the team’s performance and the inclusion of several younger players, brought into the fold due to injuries to others, as well as looking ahead to Sunday’s league game against Sir Tom Finney.

“Obviously it’s a disappointing result at the end of the day and it always feels worse to go out on penalties, because they don’t prove who the better team was.

“I think we played incredibly well when you take into consideration that we had 14 players unavailable through injuries or other reasons. We had a few of the younger players step up and get some game time.

“As a team, it’s always good to get minutes for players who may not get the chance usually. I don’t see it as impacting our performance because everyone did well today. It’s just unfortunate that the end result wasn’t in our favour.

Returning to league action at the weekend sees North End face Sir Tom Finney FC, the side Greenwood, fellow coach David Rawcliffe and several players moved from in the summer to join PNEWFC.

“I’s a big one, it’s very much like a derby for us, so it will be a very interesting game. A lot of our team has come from there, as well as myself, so I think all the girls are really up for this one, especially after this game [against Wigan].”