In a game full of drama, North End were 4-3 winners at Penwortham Priory Academy thanks to braces from Beth Wilson and Katie Woodhead.

The Lilywhites, still finding their feet this term after plenty of new additions in the summer, met a young Accrington side with a lot of quality in their ranks.

Beth Wilson was back in action for PNE after time out recently, and made a difference on the pitch, causing problems for the Accrington right back.

The hosts had plenty of possession and some good chances in the early stages as they looked to dominate the game.

It was an intense content, with fast play that meant both teams had to stay switched on at the back. 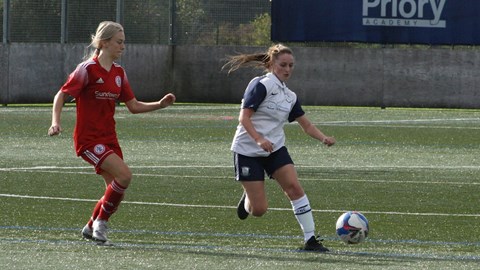 Woodhead: “Red Card Made Us Come Together”

But North End soon got the chance they needed through Beth Wilson who created the opening herself, running rings around Stanley's defence as she made it 1-0 to rubberstamp a perfect start for the team.

A goalscoring opportunity was taken away from the Lilywhites in the area by an opposition challenge, which led to them being awarded a penalty. Katie Woodhead stepped up to take the kick and didn’t let the team down, making it 2-0.

PNE felt hard done by some yellow card decisions going against them, which led to Accrington becoming more switched on, resulting in their equaliser. A strike into the bottom orner proved too powerful for ‘keeper Rose Stuttard.

More misfortune came in the form of Abbie Jones being forced off half an hour with Ellie Ditchfield on in her place to work the right side.

Chances were still coming for Preston, though, as Wilson on the wing had opportunities to score and was unlucky not to find the back of the net.

Then out of nowhere, what looked like a fair challenge by Ditchfield was adjudged to be a straight red card offence by the referee as PNE were reduced to ten players just before half-time.

Despite being a player down, the dominant play from North End continued with a fantastic strike from Liv Askam hitting the crossbar.

And the home side did get another as Wilson added to her growing goal tally after more great team play to create the chance which she finished off confidently.

It wasn’t clear which team was a player down, as Accrington had some good passages of play but without doing enough to get past the strong PNE defence.

Eventually Preston’s line was broken and Accrington reduced the deficit to just one goal, setting up a tense, end-to-end finish to the game.

Another controversial decision led to Preston getting their second penalty of the game and yet again Woodhead stepped up, looking cool, calm and collected as she found the net to make it 4-2.

It continued to be a tense contest, though, as Accrington again pulled one back with just five minutes remaining, and the visitors had a few good chances thereafter but just couldn’t get the ball in the back of the net, with Stuttard pulling off some good saves to keep her team ahead.

But North End came together well to seal their victory, with celebrations from those in attendance and the players themselves after full-time showing the significance of the women’s team’s first league win of the campaign.

Something looked to have clicked as a team, with the players looking visibly lifted by sealing the three points.

First team coach Nigel Greenwood was delighted for his players to get their first win of the campaign.

Nigel said: “[An] absolutely fantastic first win under the belt. The girls work really hard, it’s a great feeling and we’ve definitely got a happy camp.

“It’s three points on board, our first three points, and now we look forward to the next few games.

“It’s absolutely deserved, when we went down to ten girls just before half-time, only leading by one was going to be hard. The girls put the plans at half time into action and defended as a team from all ten players – fantastic.”

Asked whether this could be the start of improved fortunes for the team – with this their second win in three with a Lancashire FA Women’s Challenge Cup victory already to their name, Nigel was optimistic about what could be achieved.

He added: “Absolutely, I hope so. I said to the girls before the game. We’re not quite where we need to be, we just need a little bit more luck. Hopefully the tide will turn and we can go on from here.”

The next challenge for the girls will be in the Lancashire FA Women’s Challenge Cup against Bury FC at home.