Lucy Swift said PNE Women’s 5-2 win against Bury FC Foundation was one of the team’s best displays of the season.

North End’s winning streak continued from the previous week's win against Accrington Stanley, with the more recent triumph over the Shakers sealing the Lilywhites’ progress in the Lancashire FA Women’s Challenge Cup.

Swift, who scored twice in the second half against Bury, was pleased with the performance both on an individual and collective level. 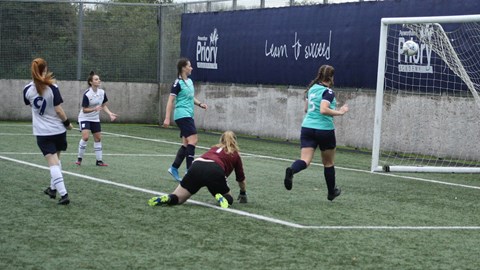 She said: “The team played really well, it’s one of the best team performances we have had.

“As a team we were really good at passing the ball around and keeping the ball, staying relaxed and composed.”

PNE dominated possession throughout the game and didn’t have any trouble scoring thanks to their controlled play across the pitch, causing difficulties for Bury, which was ultimately reflected in the scoreline.

Lucy continued: “The first half was not my strongest but in the second half, I got into my groove a bit more and got a few goals.

“I think I'm definitely improving week on week, we’re still getting to know each other but making the right decisions [on the pitch].”

A number of the women’s team players have recently moved to Preston North End from Sir Tom Finney Ladies, along with coaches Nigel Greenwood and David Rawcliffe, and Swift feels they are definitely coming together more as a team now.

Swift was substituted late on, before she had chance to claim her hat trick, but she was still pleased with the game as a whole.

She added: “I’m happy with the two goals. I know I could get a couple more, but I won’t be greedy so I will take that.”

Victory over the Shakers moves North End into the Round of 16 of the Women’s Challenge Cup.