Katie Woodhead felt Preston North End Women felt going down to ten forced her and her team-mates to come together to ensure they survived playing 50 minutes with a woman down to secure a first league win of the season against Accrington Stanley.

Woodhead twice scored from the spot, in either half, to help her team to seal three points in an enthralling 4-3 victory. 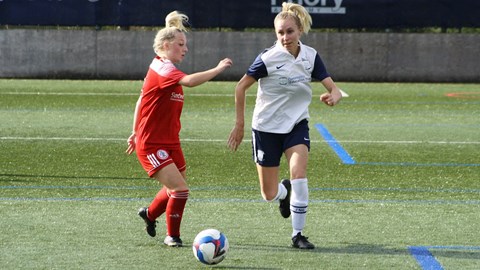 Speaking to PNE.Com after the game, she said: “Obviously we are all ecstatic about getting our first league win and to do it the way we did it I think had a huge impact on everyone.

“[The red card] should have been a big turning point in the game going down a player but I think, if anything, it made us come together more as a team. We worked for each other and battled everywhere on the field.

“It was a very strong performance across the field from everyone today and it was great to come away with a win.

“I think it’s really going to boost us as a team and has made all the hard work these past few weeks worth it and hopefully we can keep it up.”

Woodhead was the player fouled in the lead-up to the referee awarding the game’s first spot kick and while she did ultimately open the scoring with her effort, she admitted to having some nerves when stepping up from 12 yards.

“I was nervous because it was at a very important moment in the game and would give us a two-goal advantage. I knew what I needed to and was focused on hitting the ball low into the back of the net and was just hoping the goalkeeper couldn’t get down in time”.

On the second penalty, which came after the break, she added: “I was still nervous because I felt that this goal would mean even more to the team, especially with the score being 3-2 at the time. Being a player down we really needed that goal.

“I did what I needed to do and thankfully it paid off again.”