Preston North End joined the EFL’s ‘Do One Thing’ campaign for World Mental Health Day by surprising a fan who is working tirelessly to support young families in Preston, rewarding them with tickets to our next home game against Derby County and a visit from Alan Browne and Sean Maguire.

The Do One Thing campaign encourages clubs, fans, participants and the wider public to complete an act of kindness to support another person’s mental health.

As part of Preston North End Community and Education Trust’s and Preston Police’s season card initiative, whereby deserving fans doing good in the community are being awarded match tickets at Deepdale throughout the season, Barry Wade was nominated by his son-in-law Jamie in recognition of his charity work. 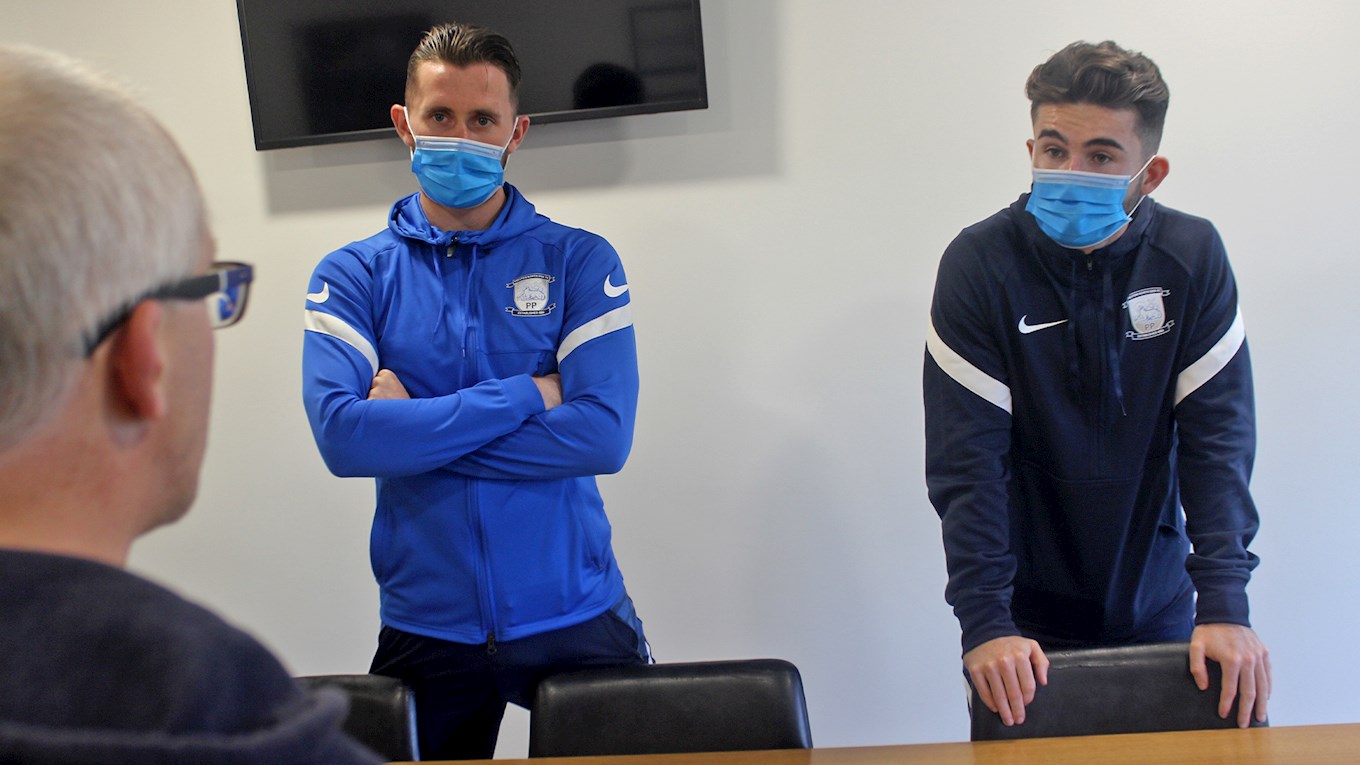 Together with wife Sue, Barry founded the TippyToes Baby Bank charity in February 2019 to support vulnerable families with the provision of essential childcare items for young children, including prams, cots, baby clothes and much more.

Barry and Sue, along with their team of volunteers, collect and recycle unwanted childcare items and redistribute them to families most in need in Preston.

Barry was invited to Deepdale under the impression that he was being interviewed about his positive contribution in the community, without knowing of the impending surprise of match tickets to the Derby County fixture – and having them presented to him by Browne and Maguire.

Barry said: “It was a massive shock. It was great to meet them, it’s two people I’ve watched on the pitch many times and I love to see the North End lads.

“It really was a pleasure to meet them. They’re really nice guys who were really interested in what we do and it’s a real shock, but a really enjoyable one.”

Alan Browne said: “It was great for myself and Seani to meet Barry and Sue to find out a little bit more about what they’re doing, not only for the Preston community, but for the surrounding communities as well.

“As part of the EFL Do One Thing campaign, it was the least we could do to give something back to them and invite them to the Derby game, and hopefully they can come and enjoy the game.”

The charity was founded as a result of Sue’s work in a childcare environment and her experience of working with vulnerable families.

Barry hopes that the charity’s work can help to alleviate the stresses on families most in need and support those individuals with their mental health.

“We help in a little way, just taking clothes in and redistributing them,” Barry continued.

“If it helps one person with their mental health, or postnatal depression, because they don’t have to think about their cost of living, then it’s something we can do to help out.

“If they can take that pressure away just by giving us a call and getting a free donation of clothes or a cot, it’s a massive help, and to take that stress away from them is a simple thing to do but it could massively step them along the way.”

TippyToes is seeking to purchase a van to support their deliveries going forward to prevent their volunteers from using their personal vehicles, with a fundraising target of £5,000. You can donate by clicking here.