Women’s team left back Courtney Macpherson was disappointed that her side could not maintain their positive start in last weekend’s Women’s FA Cup tie against Runcorn Linnets.

Abi Cookson fired the Lilywhites ahead within minutes of the first qualifying round tie in Cheshire, but Runcorn pegged them back immediately, and despite creating plenty of further opportunities, the visitors were dealt further blows before and after the break, bowing out of the cup with a 4-1 defeat. 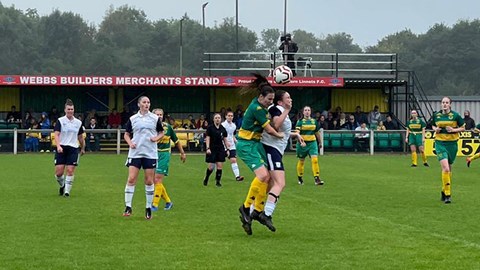 “I think we got off to a really good start. We were aggressive and attacked their goal well, which showed with us getting the early goal. It’s just unfortunate that the feeling of being ahead was short-lived.

“When they scored their first goal it was annoying, but it’s part of football, we just needed to keep our heads in the game and continue to put in the work to try to win the game. There was plenty of time left and we had been creating plenty of chances”.

“As the first half continued I think the weather was having an impact on both teams because the ground became so slick and the ball was just whipping across the surface making it harder to control.”

She joked: “It also had an impact on some tackles as well. If you were going in for a slide tackle you either had to start sliding thirty seconds earlier or you'd be sliding off the pitch.”

Macpherson was frustrated that the theme of missed chances continued to be a talking point in defeat, but feels that as she and a wealth of new team-mates continue to get to know each other’s games, the process of putting the chances away will come more naturally to the team.

“We’ve been really successful getting forward and getting into the attacking third of the pitch but are narrowly missing the target. I think it’s something that will come as time goes on.

“We’re still a very new team and learning how to play with each other. It’s not just something that happens overnight. We have a very strong team with some very talented players so hopefully as time goes on we can put two and two together and come away with a few wins.”

There is more cup action in order for the women’s team this weekend as they face Hindley Women in the Lancashire FA Women’s Challenge Cup, which Macpherson is looking forward to.

“I think we stand a very good chance in this game [against Hindley]," she continued.

“Obviously when we last played them [in pre-season] it was our very first game as a new team and with the past few games we have played we have been coming together, even though the results don’t show it, I believe we have a very strong chance this time around.

“It’s a chance for use to put this game behind us and learn from our collective mistakes. The only way is up from here.”

Follow the women’s team, whose running is supported by Preston North End Community and Education Trust, on Twitter by clicking here.