Women's team goalkeeper Rose Stuttard felt it was only an 'unfortunate mistake' that led to PNEWFC falling to defeat against Penwortham Town on Sunday.

North End lost out as an own goal in the second half, sparked by miscommunication among the Lilywhites' defence, gave nearby Penwortham all three points.

But shot-stopper Stuttard felt PNE had been largely dominant and might have overcome that error to find a win with improved chance creation at the opposite end of the pitch. 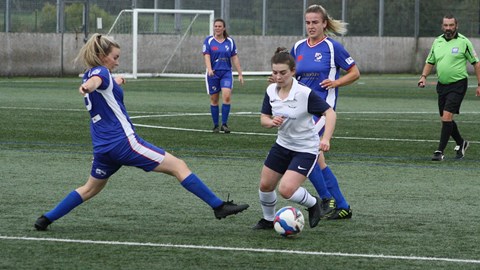 "Overall, I think we had a very good game. Obviously it’s disappointing to not come out with a win when you look at how we played, and it felt like we dominated for a good percentage of the game.

"We worked extremely hard throughout the game and I feel everyone left everything they had on the pitch and no one can be disappointed in their performance today.

"Everyone kept their composure during the game, even after the own goal we didn’t seem to let our head's drop and kept battling to try and find a way back into the game.

"I think this was one of our better games on the defensive side of things because we held them back and didn’t allow them to get a shot on goal, which is a very good thing and something to really think about after the last few games. It’s a huge improvement.”

While the defensive work, but for that own goal, pleased Stuttard, she feels North End are still finding their rhythm in attack.

"Finishing and making those decisions in the final third is the only thing holding us back right now. You can’t win a football match if you aren’t scoring.

"I think we just need to recoup this week and just not be scared to just shoot. I think Swifty and Abi had a couple of great chances, it was just unfortunate they couldn’t find the net."

The goalkeeper spoke of sticking together after the costly mistake and regrouping for their next match against Accrington Stanley on 10 October, with a clear weekend before then.

"We can’t blame anyone, it’s no-one's fault. We win together we lose together, all we can do now is focus on the next one and take all the positive and negatives from this game to keep moving forward.

"We have a week off so hopefully we can get a good few training sessions or even a friendly in. We’re a great team and can only keep improving as time goes on."