Lucy Swift felt PNE Women were the better side for parts of their 3-1 defeat against Haslingden Ladies and Girls, but suggested that a drop in their intensity levels was one of the reasons they couldn’t hold on to their early lead.

Olivia Askam scored inside 20 minutes to give the Lilywhites the advantage against the league’s second-placed inside, but the visitors couldn’t maintain their positive start as Haslingden scored three second half goals to turn the game on its head. 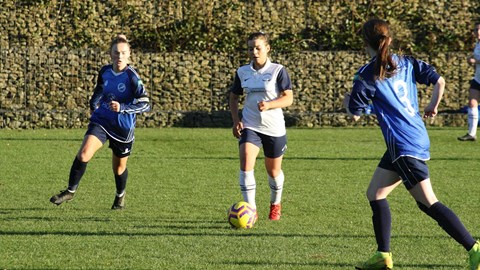 Swift was pleased with how the team performed in the first half but said a quick start from their opponents after the half-time interval affected their confidence.

She said: “I think the first half we were definitely the better team, it was probably one of the best we’ve played as a team. Towards the end of the first half our intensity dropped slightly but we were still playing well and went into half time with the leading goal.

“At half-time we made a few changes to give some players returning from injury some recovery time so that changed the way we played.

“The second half I think Haslingden came out stronger than us and after we conceded the first two goals so close together, it had an impact on our confidence as a team.

“Although there were spells in the second half where we looked to be the better team, creating chances and moving the ball well, we just couldn’t find a way to convert our chances”.

Swift maintained a confidence, though, that North End are pushing in the right direction.

“Even though this result wasn’t what we wanted I still believe we are in a good place and have proved how well we can play as a collective unit. When we do this we put in excellent performances.

“We’ve made a lot of progress and it has had a lot to do with how we have bonded as a team over the season both on and off the pitch. We have so much potential in the squad to become a team to be reckoned with next season.

“I think if we continue to work on playing together as a team and become a bit more resilient, in the future we will be able to maintain a lead, even in the tougher games.”