The EFL is this week launching its first ever 'Week of Action' to celebrate the impact of EFL clubs in their communities.

All 72 Clubs and Club Community Organisations will showcase activity with EFL players and managers joining participants across England and Wales.

The project will involve the distribution of free food, water and dates to Muslims who are fasting during Ramadan, which began over the weekend. 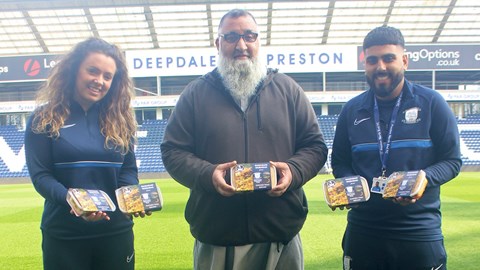 Meanwhile, the Trust will also host an extra special edition of its Walk And Talk For Lilywhites programme on Thursday, starting at the later time of 12.15pm from the Sir Tom Finney Splash statue before the walk around Moor Park begins at 12.30pm.

The session will be followed by participants being invited back to the Players' Lounge at Deepdale for a workshop which will include a talk with founder of Walk And Talk 4 Men in Preston, Rob Flood. New participants must complete an online health questionnaire by clicking here before attending their first session.

Using the power of football, EFL Clubs and Club Community Organisations (CCOs) collectively invest over £59m in their communities every year, engaging with some of the most vulnerable members of society.

In 2021, EFL Clubs and CCOs were recognised at both the Leaders Sports Awards and Sports Business Awards for the important and unique role they played in supporting their local communities during the pandemic.

Rick Parry, Chair of the EFL, said: “EFL Clubs are embedded in the towns and cities from which they take their name and this bond is strengthened by the life changing initiatives they run across England and Wales every single day.

“The EFL Week of Action is an opportunity for us to celebrate this invaluable work and demonstrate the remarkable difference clubs have on their communities away from the pitch.”

Liam Scully, Chair of the EFL Trust, said: “Clubs’ work in their communities happens on a huge scale day in day out and directly aligns with priorities for the people in our communities both locally and on a national scale.

“The hours that are committed by our Club and Community Organisation teams and volunteers demonstrates an unwavering commitment to improving lives up and down the country and building stronger, healthier more active communities.”