Preston North End Community and Education Trust [PNECET] was presented with the EFL Community Project of the Season award for the Championship at the House of Commons earlier this week, recognising its PR1-Community Ramadan response project.

The PR1-Community Ramadan project was delivered from April to May last year to support those fasting during the holy month of Ramadan, with the provision of free Iftar packs that were distributed from a stall in Deepdale and via doorstep deliveries. 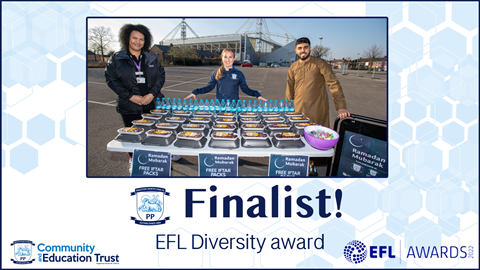 The project was said to have won judges over with its innovative project supporting members of its local community marking Ramadan and Eid, with a total of 3,000 Iftar packs – which included fresh fruit, dates and water – delivered across the local community.

Staff from PNECET, alongside Omar Khan of the Preston United Youth Development Programme and Deepdale Councillor Zafar Coupland, were present at the House of Commons on Tuesday for the EFL Community Awards ceremony.

Chief Executive of PNECET Tom Drake said: “We are delighted to have received our Community Project of the Season award for the Championship in recognition of our PR1-Community Ramadan project from last year.

“It was a pleasure for members of our team and some of our key project partners to be recognised at the EFL Community Awards event, which was a fantastic opportunity not only to reflect on our own successes, but to learn and celebrate the other clubs’ award-winning work, which can only support the development of our own provision moving forward.

“We are also continuing to make an impact in our community with this year’s PR1-Community project which has evolved to now offer a service in three locations across Preston, thus reaching more people in our communities.

“We now look forward to the EFL Awards Ceremony this Sunday with nominations both in the Community Project of the Season category and the EFL Diversity Award category in recognition of our equality, diversity and inclusion work in Preston.”

Preston North End has also been named as a finalist in the EFL Diversity Award category in recognition of projects including its PR1-Community project, its culturally appropriate half-term food hamper service from February last year, and its Communities United programme – all projects working with ethnically diverse groups in Preston.

The winner of the EFL Diversity Award and the overall winner of the Community Project of the Season award – with PNE up against League One winners Burton Albion and League Two winners Swindon Town – will be announced at an EFL Awards ceremony in London on Sunday 24 April.

For more information about the PR1-Community project, please email mohammed@pne.com.