Preston North End Community and Education Trust’s [PNECET] ‘PR1-Community’ Ramadan project from April last year has been recognised as the winner of the Community Project of the Season for the Championship by the EFL Awards. 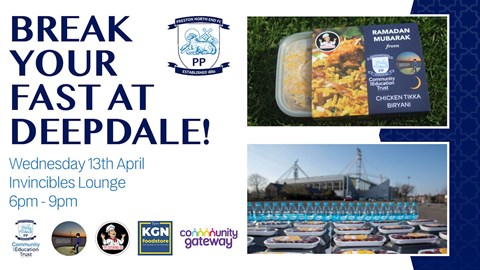 Muslim Supporters Invited To Break Their Fast At Deepdale

During Ramadan, known as the festival of sacrifice, Muslims fast – abstaining from eating and drinking from sunrise to sunset throughout the month – with Iftar packs distributed to show support to those were fasting.

More than 3,000 Iftar packs were distributed as part of the initiative, and an additional 1,000 celebratory South Asian sweet packs were delivered thereafter during Eid-al-Fitr – a celebration that occurs following the conclusion of Ramadan.

The Club is said to have won judges over with its innovative project supporting members of its local community marking Ramadan and Eid.

PNECET Chief Executive Tom Drake said: “We are delighted to have had our PR1-Community Ramadan project recognised as the Community Project of the Season for the Championship.

“During Ramadan last year, through this project, we engaged with more than 3,000 local people by handing out Iftar packs for the use of those who were fasting during the holy month; a fantastic achievement made possible by an outstanding overall team effort.

“Through collaboration with local partner organisations, we have helped to increase social cohesion and integration in the local community, while diversifying our fanbase, participant-base and our provision as a whole. It is thanks to the incredible work of our partners and staff, as well as our partnership with the football club, that this success was possible.

“It is appropriate that we now begin what we hope will be another vastly successful Ramadan project, through which we hope to go a step further by engaging with even more people from our local community by handing out traditional goods from three different locations in Preston.”

The winners from the Championship, League One and League Two will receive their awards at a special event hosted at the House of Commons on 19 April alongside project participants, staff and volunteers from each Club Community Organisation considered instrumental in delivering this commendable work.

An overall winner will be announced at the EFL Awards ceremony in London on Sunday 24 April.