Preston North End has been shortlisted for the EFL Diversity Award for the work of the Preston North End Community and Education Trust engaging with ethnically diverse local communities through various programmes over the last year.

Diversity has been a key area of focus for the Trust with increasing strands of work not only to work with ethnically diverse local communities but to increase its provision for women and girls and for those with disabilities.

The EFL Diversity Award is new for 2022 and Preston North End has been recognised for the work of the Trust engaging with its local Muslim community – which has included projects celebrating Ramadan and Eid, as well as providing culturally appropriate foods to vulnerable families during school half-term. 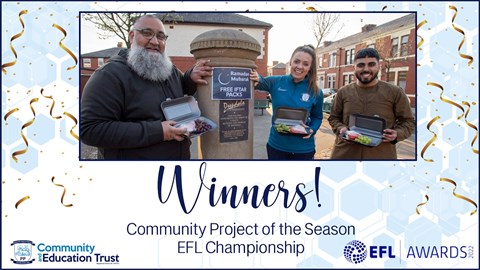 As well as working with its local Muslim community in Deepdale, the Trust has also been recognised for its Communities United programme delivered in early 2021 and introducing a multi-faith prayer room at Deepdale for the use of fans on matchdays.

The Communities United programme saw sustainable social integration and meaningful civic participation activities delivered in an online capacity to bring ten families of a varying cultures together on a weekly basis to learn about one another’s experiences of living in Preston.

The programme even included a guest online talk from Patrick Bauer and Emil Riis to share their experiences of growing up in Germany and Denmark respectively, playing across Europe and their own perspectives of playing and living in Preston and the surrounding areas.

The shortlisting follows the Trust already having been crowned as the divisional winner of the EFL Community Project of the Season for its PR1-Community Ramadan response initiative from last year, which saw 3,000 Iftar packs – used to break the fast during Ramadan – delivered to those fasting in Deepdale last year.

PNECET CEO Tom Drake said: “We are once again delighted to have been shortlisted in a second category for this year’s EFL Awards, with our work engaging with ethnically diverse local communities being recognised in the EFL Diversity award category.

“Our team delivered some truly fantastic work through our half-term food hamper initiative in February 2021, and with our Communities United project over the first 12 weeks of last year.

“These projects allowed us to make significant steps in engaging with our local communities and diversifying our provision, driving innovation with renewed cultural perspectives being considered across all of our programmes.

“This not only led to our successful PR1-Community Ramadan project from last year but has seen since further initiatives and new programmes being delivered as part of our provision.

“We will strive to continue to improve and add to our provision to cater for the ethnically diverse communities living in Preston while pursuing with initiatives to make Deepdale a welcoming and inclusive environment for supporters of all faiths and backgrounds.”

Visit the PNECET website to find out more about all of its work, including how to get involved in its programmes for women and girls - which include a Wildcats football programme and a partnership with the Preston North End Women's Football Club.

You can also find out more about disability provision such as the Every Player Counts programme and the FA Talent Hub programmes with links to the England Para Talent Pathway.

The overall winners of the Community Project of the Season award and the EFL Diversity Award will be announced at an award’s ceremony in London on Sunday 24th April.