Alan Browne has extended his support for TippyToes BabyBank by providing funds for them to operate with further storage space.

TippyToes BabyBank is a charity that provides disadvantaged children with recycled essentials, including food and clothing.

After meeting the founders of TippyToes – Barry and Sue Wade – for the first time last year, Browne donated items of children’s clothing to the charity, and more recently, after learning of the charity’s urgent requirement for storage space, the club captain organised and paid for exactly that for TippyToes. 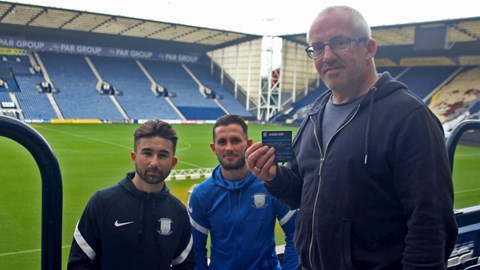 The charity had to leave one of its existing storage spaces last month, which left it with overflowing stock in another storage facility, which would have meant the stock having to be disposed of had it not been for Browne’s intervention.

Speaking about the reasoning behind his involvement, Browne said: “Myself and Sean Maguire did an appearance last year where we met the couple in charge [of TippyToes] at Deepdale and gave them some tickets for the work they’ve been doing.

“It was something that really interested me because it was something I’d thought of in the past in terms of whether there are charities for babies and children. You start to think how people cope.

“I saw the tweet that they were looking for storage so I gave them a message and thankfully they got back to me and we managed to sort something out.”

Meanwhile, Sue Wade of TippyToes BabyBank said: “We are blown away by Alan’s care and generosity for our charity.

“This is amazing, and it means we are able to keep the items and continue to collect and sort equipment for families in need.

“To have the captain of PNE helping his local community is just awesome, with both of us being avid fans, it proves to us that the players really do care about their community and want to support where they can.”

Together with Sean Maguire, Browne met the founders of TippyToes – Barry and Sue – in October last year.

The Irish pair surprised them with match tickets to watch a home fixture as part of the EFL’s ‘Do One Thing’ campaign, encouraging people to undertake one random act of kindness to support people with their mental health for World Mental Health Day.

Visit the TippyToes Facebook page here to learn more about their work or to donate to the charity.