Premier League Kicks is a flagship football programme that began in the 2006/07 season and is now delivered by 90 professional football clubs to offer free football sessions and educational workshops to eight to 18-year-olds, with more than half of clubs’ delivery venues being situated in the top 30 per cent of the nation’s most deprived neighbourhoods.

The PL Kicks 15-year anniversary fortnight celebrations, from 14th February until 23rd February, has seen all clubs delivering Kicks nominate their own ‘Local Legend’ – somebody who has taken part in, volunteered, or worked on the programme and has inspired others through their dedication, work ethic and own personal development.

Each nominee has received a bespoke ‘Local Legend’ football card, which has been created with support from Premier League partner Panini.

John, a former participant of PNECET’s Guild Lodge programme, who has since progressed to gain volunteering and paid staffing roles with the Trust, has been selected as our ‘Local Legend’. 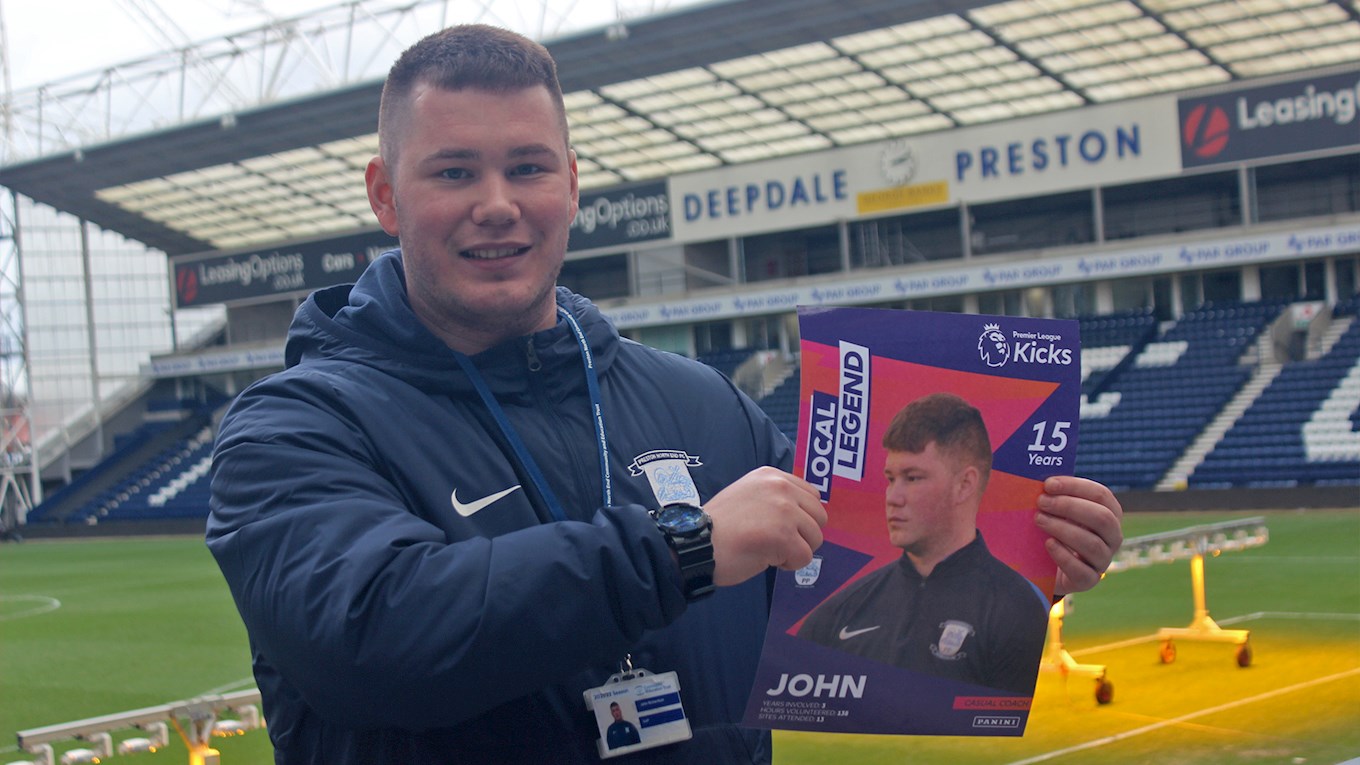 John was introduced to Kicks in a volunteering capacity and continues to make a vital difference through delivering the programme at venues across Preston, which include the Callon All Weather Pitch and Smith’s Rec.

As well as facing each other during the tournament, teams also accessed ‘Local Legend’ John’s ‘Been There Done That’ workshop, in which he has shared his own personal experiences to provide advice for participants about steering clear of crime.

North End pair Ledson and Rafferty attended the tournament to answer questions from all teams’ participants and present ‘Local Legend’ John with a certificate to recognise his contribution to the Kicks programme.

John said: “It was surreal when I first got it and I wasn’t expecting it at all. Meeting the players was a bonus which is all good.

“I’m not doing Kicks for myself, I’m doing it for the kids, trying to keep them out of trouble, get them active and playing with their mates and playing some football.

“I enjoy all the sessions I deliver on, it’s all different aspects of life. We’re working with kids, working with veterans, working with people with disabilities. It’s a very wide range which I enjoy doing.”

Community Engagement Officer Alistair White added: “We had a fantastic half-term week celebrating the 15-year anniversary of the Kicks programme.

“We were able to host our own tournament at UCLan Sports Arena as well as taking a boys’ team to Accrington Stanley and a girls’ team to Fleetwood Town.

“Kicks is a fantastic programme which provides a great way for PNECET to get out into local communities and engage with young people through vital physical activity and educational sessions, which can help to keep our participants on a positive pathway in life.

They led a Q&A with participants, who also benefitted from a 'Been There Done That' talk from staff member John. 🌟

Thanks to Ryan, Joe and all eight clubs involved!#PNEFC #PNEFC pic.twitter.com/0Bx7KNOsa4

“Among those we have been able to celebrate is our ‘Local Legend’ John, whom we are delighted to have as a casual member of staff, not only supporting the development of young people on Kicks, but providing important delivery support across our provision.

“To see John recognised by Ryan Ledson and Joe Rafferty was fantastic, particularly as he is a PNE fan himself, and we are confident that the presence of the players will have made an invaluable difference to participants from all clubs who participated in our tournament.”

The Trust’s Kicks delivery was accessed by 373 young people throughout 2021, which saw 355 hours of sessions delivered.

For more about our Kicks provision, please visit pne.com/plkicks or email alistair.white@pne.com.