Preston North End Women made it five games without defeat with Liv Askam and Katie Woodhead providing the goals in a 3-2 win that ended the unbeaten run this season of their opponents Haslingden Ladies and Girls.

Askam had a few good chances on the ball, looking confident with it at her feet, but the visitors’ defence did their job to prevent her from progressing.

Shortly after, the goalkeeper from Haslingden fell ill, and without a substitute to replace her, an outfield player had to step in between the sticks, leaving the visitors down to ten players for the rest of the game.

This helped to boost the Lilywhites’ confidence, having an extra player meant they had the upper hand on the opposition.

Just before half-time a Haslingden player was penalised for handball in her own box, which led to a penalty being awarded. Woodhead stepped up and ensured that her team took the lead with a calmly taken finish.

Minutes later, the goal seemed to help the Lilywhites as they doubled their lead through a fantastic strike from Askam, who worked her way past the defence to place the ball in the back of the net and give her team a 2-0 half-time lead.

Askam picked up where she left off after the break to double her own personal tally in the game with a chip over the ‘keeper that further demonstrated her class on the ball, making it 3-0 five minutes into the second half. 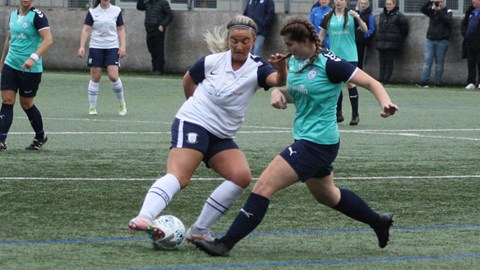 Stuttard Pleased To Beat ‘Best Team In The League’

Haslingden responded well in the second half on the whole though and came back into it with a penalty of their own in the 61st minute, which ‘keeper Rose Stuttard was inches away from saving, having guessed the right way without being able to get a hand on the ball.

Despite Stuttard's efforts in goal, Haslingden got the goal back, which left them rejuvenated and two minutes later they scored another to reduce the deficit to just one.

For the ten minutes that followed, the Lilywhites looked to stay calm and composed and while they initially seemed to struggle to keep the ball, they eventually found their way back into the game.

Askam and Abi Cookson then had further chances to extend the lead but couldn’t take advantage.

Swift put some decent crosses into the box, linking up with Lottie Greenwood, causing problems for the opposition but again without breaching the goal.

PNE managed to hold onto their lead for arguably their biggest three points of the season against a very strong side.

After the game Nigel Greenwood gave his thoughts on his team's performance.

He said: “We knew it was going to be a tough game, they are favourites for the league and Haslingden proved early on that they were a decent side, very strong.

“They put us under a little bit of pressure early on, but we came through that, and I think we finished the first half stronger.

“I think we were strong though the whole game as a team, we only had a little bit of a blip in which they scored the two goals. The penalty we had no complaints about, it’s just one of those things. As a team we regrouped and stayed strong.”

“We’re excited for the rest of the season now, we’ve just beaten the favourites for the league so it’s there for us now.”