Rose Stuttard spoke of the excitement in the Preston North End Women camp after beating Haslingden Ladies and Girls FC 3-2. 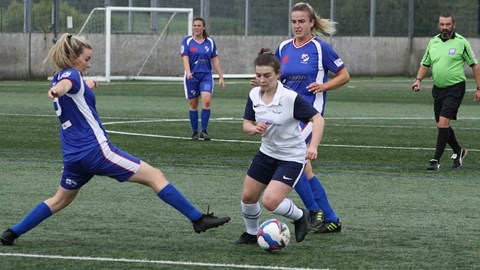 In goal, Stuttard had some good saves to make in the first half to keep the opposition at bay, with good play on display from both teams.

Haslingden, who finished the game with ten players due to a goalkeeping injury, sat below the Lilywhites in the table prior to the game, albeit with a number of games in hand, and having impressively won six and drawn one of their seven league outings beforehand.

But PNE sailed into a three-goal lead, with two goals before half-time one just after, and that advantage proved enough to fend off the visitors’ second half comeback and halt their unbeaten run this term.

Stuttard said: “We started off solid defensively with nothing getting through, and we were passing it round.

“We had a few early chances that we didn’t manage to put away, so when the first goal went in, we built on that.

“We played as a team, chased everything as a team, and it all came together today. We beat the best team in the league.”

Stuttard, who felt she was close to getting a hand on the kick, added: “I was very nervous, but overall, more gutted because I got there. After that they had a strong ten minutes, but we pulled it back together and made sure we kept the win.”

Stuttard said all the players are now in an even more positive frame of mind after the win, which takes their unbeaten run to five matches.

“Going forward, on paper, we should be able to beat anyone. We were feeling strong and confident at half-time, but we knew the game wasn’t over at half-time and had to keep battling, but the confidence was there which is something we have been lacking.”

The win saw North End move into fifth in the North West Women’s Regional League Division One table with nine games of the campaign remaining.