Olivia Askam is aiming for Preston North End Women to take nine points out of nine in their final three fixtures of the 2021/22 campaign to set them up for a strong season next term.

The women’s team have surged up the table since the turn of the year, to the heights of third, but consecutive defeats in their last two outings against the top two sides in the table – most recently to leaders Blackburn Community Sports Club – have since derailed any outside shot of promotion. 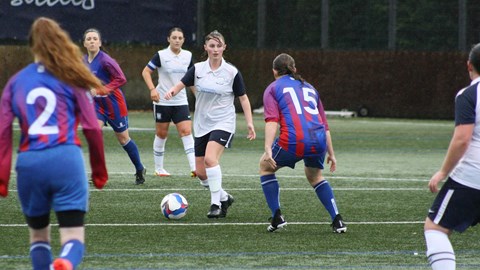 Prior to those successive losses, the Lilywhites had been on a nine-match unbeaten run, which Askam said was demonstrative of the team’s progress in the current campaign, and that they will look to use that improvement as a platform to go one better next season.

She said: “I think the results have shown how we have developed throughout the season. We’ve worked on developing stronger relationships both on and off the pitch and it’s made us a harder team to face as the seasons has progressed. We have strengths all over the pitch and know how to use them as a collective unit.

“With three games left it’s important for us to finish strongly. We’re looking to come away with nine points which should put us within the top four, leaving us with a great staring point and building a platform for next season where I hope we can battle for promotion.

“We can hopefully enjoy our last few games knowing just how far we’ve come and then we can have some time to reflect on this past year.”

It was a 3-0 defeat last time out for attacking midfielder Askam and her team-mates, who conceded all three goals against Blackburn Community Sports Club in the first half.

She admitted that that them left the side with too much to do to get back in the game.

She added: “I think it took us a bit of time to adjust to the conditions on a large, uneven, playing surface and therefore we couldn’t really get a foothold in the first half.

“Although we started out okay we struggled to keep the ball efficiently against their high press and therefore often found ourselves forcing the ball forward too much. Going into half-time down by three goals is never a great feeling but we went into the second half with more fight and intensity as we had nothing to lose.

“We kept the ball much better, but unfortunately, we just weren’t able to create enough chances against a strong side.

“We’ve shown we can adapt during a game and I personally think everyone put in a shift today to match them, especially in the second half.”