Barclays and England Football are leading the #LetGirlsPlay campaign which looked to create the biggest ever girls’ football session on Wednesday 9th March – following both the EFL’s Women’s Weekend campaign and International Women’s Day.

By 2024, The FA’s and Barclays’ ambition is for girls to have the same access to football opportunities as boys in schools and clubs. 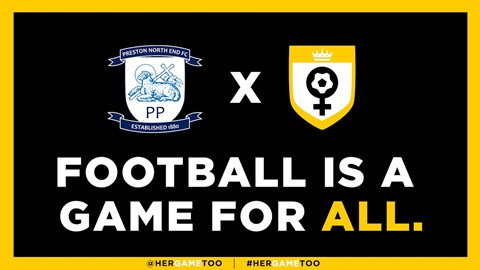 #LetGirlsPlay is a campaign to drive influence and change perceptions, showing that football can and should be played by girls.

It is bringing together a growing community of people of all genders, ages and backgrounds who want to champion equal access for girls, helping to create independent, resilient young girls who will be a force for good in all local communities.

As part of the #LetGirlsPlay session, learners from the Preston Centre of Sporting Excellence – an official education partnership between Preston North End Community and Education Trust and Preston College – delivered a multi-faceted football session at Our Lady & St Gerard’s Primary School in Lostock.

⚽️ We have joined today's national #LetGirlsPlay effort with @BarclaysFooty and @EnglandFootball to create the biggest ever girls' football session!#PNECET learners have been @OLSGRCPS delivering a session for pupils. 🤍

The session included opportunities for Year 5 and 6 pupils to participate in fun games and football drills that were led by our learners, as well as small-sided matches in which some of the girls also got involved.

Our Lady’s & St Gerard’s teacher Mr Delaney said: “The aim is to encourage as many girls to play football [as possible]. What I wasn’t expecting was the enthusiasm of the coaches and the interaction.

“[It was] really good, clear communication skills, a patience as well and also coaching with a smile on their face. If one of our girls was struggling, they didn’t feel like they had failed or they weren’t doing very well. It’s just the interaction and the friendliness, they’ve been excellent and have got everyone playing football.

“There have been girls out there who I have never seen play football on the yard who are smiling, passing the ball and shooting. It’s fantastic and completely inclusive of all the girls.

“There were some of the girls who hadn’t kicked a ball previously will actually see that this is something that they can do. They’ve discovered a talent that they perhaps didn’t have.”

For more information about the Preston Centre of Sporting Excellence, please visit the Preston College website here or email graeme@pne.com.