Freya Hunt and Rose Stuttard gave their thoughts on the women’s team’s unbeaten run after Sunday’s 3-2 win against Morecambe Reserves extended their fine vein of form to seven matches without defeat.

Liv Askam scored twice in the first half only for Morecambe to equalise on two occasions, but as Hunt saw a shot tipped onto the bar late in the game, Abi Cookson converted the rebound to seal three points for North End.

That made it six wins out of the last seven for the Lilywhites, with the other game in that time ending in a draw, in a run that stretches back to the last game of 2021. 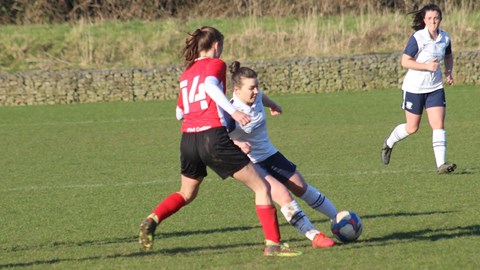 Hunt said: “I thought we had good spells in possession. We took the lead quite early on and definitely deserved it. They equalised, which was a bit unfortunate on our part, a few little sloppy mistakes and they’re back in the game, which makes it difficult.

“At 2-1 we were looking bright and like the only team to go on and win it, but we let them back in when we probably shouldn’t have done and it’s taken a last-minute goal to get us the three points to keep the unbeaten going which is taking us right up the table.

Stuttard, who played in goal but has shown versatility throughout the campaign in multiple positions, added: “I thought it was a good game, we went 1-0 up quite early and they pulled one back, it was a close game. But we were playing as a team and we were passing it around well, the pitch was quite bobbly, so at times it was tough to do that, but we were playing the ball over to [Lucy] Swift, which seems to be a great tactic at the moment.

“She got on [the end of] absolutely everything. They did keep us out defensively, they were doing well, but we kept battling and went in at half-time 2-1 up. We were giving it everything we could.

“A last-minute equaliser is always exciting, it came from a brilliant shot from Freya, it hit the crossbar and bounced down and we got it. We deserved it and we were the better team.”

On her role in the winner, Hunt added: “I heard the referee say two minutes [were remaining] and I thought I’d hit it and see what happens. To see it hit the bar, I was gutted, but to see Abi tap it in, it’s got us the goal. It doesn’t matter who scores, we’re all a team and just want the three points, which is all that matters.

“We want to push for the top two or three. Teams that can pull out the wins at the end, it’s the sign of not a bad team, and I think we probably did deserve the win today.”

Stuttard concluded: “We came back after Christmas, won a few games and it’s just kept going. As a team we don’t look like we’re about to give any points away.

“We’re a new team and are gelling well as a team. A lot of us only met each other at the beginning of the season, but now we look and play like a team that’s been playing for five or six years.”