The women’s team tasted derby day disappointment as their nine-match unbeaten run was halted with a 4-2 defeat at home against Blackpool. 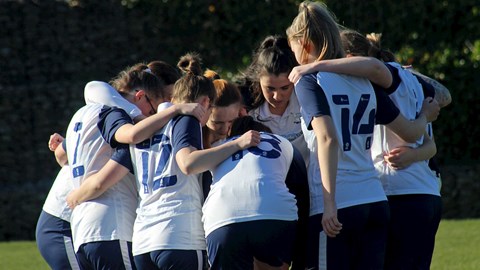 Beth Wilson opened the scoring on her return from injury, and while Blackpool responded with two first half strikes to turn it around go in ahead at the break, Lucy Swift looked to have got North End back in the game when she restored parity within ten minutes of the restart.

But the visitors scored twice in the final 20 minutes to condemn PNE to a first loss since defeat in the reverse fixture back in December.

The Lilywhites started brightly as Freya Hunt had a shot from a corner cleared off the line within moments of kick-off, and Olivia Askam had a shot blocked by a sliding challenge from a similarly dangerous area just a minute later.

Blackpool came back into the game slightly with more of the ball played in the middle third, with Alice Lonsdale having to be alert to clear a cross at the near post.

At the other end, Wilson showed the first signs of the threat she would cause down the left flank, beating her marker at the byline but crossing into the ‘keeper’s arms.

It didn’t take much longer for her impact to be felt for all to see, as she latched on to Askam’s through the ball down the inside left channel and into the area for Wilson to finish past the Blackpool goalkeeper.

The visitors were level within two minutes, though, with a free-kick from a narrow angle on the left-hand side curled into the far, top right corner to equalise.

North End’s endeavour continued though as a Greenwood cross from the right threatened to set-up an instant response of their own, but a team-mate couldn’t provide the finish.

Wilson had two good chances to reinstate the lead when she again got in behind down the left and into the area, but the Blackpool goalkeeper twice produced saves with her feet to keep her and North End at bay.

The Lilywhites were to rue those chances when the visitors went in front ten minutes before half-time with a finish from the edge of the six yard box.

And Blackpool could have come extended their lead after the break, starting the second half well, when a free-kick from 20 yards struck the crossbar and the rebound was blazed over.

It was to be PNE that grabbed the next goal, though, with Swift on target after 54 minutes – racing in behind under pressure from a defender and with the ‘keeper rushing off her line, she finished coolly into the bottom corner.

North End looked to take confidence from that point, seeing more of the ball for the next quarter of an hour, in which Swift and Askam both tested the Tangerines’ ‘keeper.

But with just over 20 minutes remaining, Blackpool regained their lead when a shot bounced awkwardly in front of goal and PNE couldn’t prevent it from crossing the line.

It was the fourth goal ten minutes later that effectively ended the contest, despite North End’s best efforts, as Blackpool pounced in the six yard box from a corner.

It wasn’t for the want of trying for North End to pull a goal back, who had a late half chance through Ellie Ditchfield with her shot towards the bottom corner saved, but it unfortunately wasn’t enough to keep their nine-game unbeaten run intact.

Speaking to PNE.Com after the game, Nigel Greenwood said: “It’s disappointing, not only with the fact that it was Blackpool, but we’ve lost the unbeaten run. The girls have been great since the turn of the year but the unbeaten run is gone and possibly the slim chance of promotion we had, I think that’s gone as well. It’s three different disappointments in one.

“It was a tough game, I don’t think there was much between the teams, in fact I think we possibly edged it in the main, but obviously Blackpool scored the goals to win the game.

“I don’t know whether one or two of our girls got tired towards the end, but we were still looking dangerous, we were playing the ball over the top, Swifty was looking dangerous getting on the end of things.

“Set pieces did us – they scored three goals from set pieces and it’s hard to come back from that. They got the goals when it counted and the last ten minutes I think we didn’t really push enough to deserve to get anything out of the game.

“There are four games left and we want to get as many points as we can from now to the end of the season and hopefully that sets us up for next year.”