A Sands United team is being formed in Preston to support men and their families who have been sadly affected by baby loss.

Sands United provides a unique way for dads and other bereaved family members to come together over a shared love of sport and football under the banner of the Sands [Still and Neonatal Deaths] charity.

There is a network of more than 25 Sands United football teams across the United Kingdom, throughout England, Scotland, Wales and Northern Ireland, but there had been no Sands United representation in Lancashire before now. 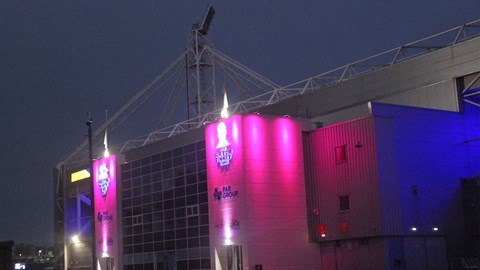 Rick and his partner, Caron, sadly lost their son, Ethan, when 18-weeks pregnant, four years ago.

Rick wanted to honour Ethan’s memory through his love for football – as a passionate North End fan himself – which has resulted in the formation of the Sands team in Preston.

While the team is in its early days, Rick is hopeful of creating a community that is supportive of families affected by baby loss in the Preston area.

He said: “It all started when I lost my son Ethan in 2018. We were nearly 20 weeks pregnant and he was born at home. I nearly lost my partner Karen at the same time; she had a really difficult time.

“I thought it would be nice, as well as helping myself, to support other people in the area that might be struggling as a way for people to make friends that have been through similar experiences.

“I hope I can find people in the area that we can help as well to get together a team and have a good kick-around. I’m a massive North End fan and it’s nice that I’ve become aware of this through PNE and managed to get something from that.”

There are a handful of players involved currently with Rick looking to recruit players for smaller sided competitions initially, but there are aspirations to play with five-a-side, six-a-side and 11-a-side teams.

From there, the feeling is that a community can be formed which could lead to all sorts of support mechanisms – from the potential formation of an 11-a-side team to community fundraisers, bringing people together, in aid of the Sands charity.

Rick added: “It’s important to include those family members and friends as well, those who have been there for people affected by baby loss awareness would be welcome to join.

“If guys want to come to us and share what they’re going through, that’s absolutely fine. If they don’t and just want to turn up and play, there’s no pressure on having that communication if they don’t feel ready to talk.

“We want to get to 11-a-side stage but we will be starting off as five or six a side and grow from there.”

The team is still in a planning stage to organise regular training and games opportunities. Training is currently held on a Thursday evening, but without a set time or venue - however, interested players can find out more and get involved by contacting sufcpreston@gmail.com.

You can also visit the Sands United Preston Facebook page by clicking here.