Abbie Jones and Sam Ball both got their first goals of the season in Preston North End Women's 6-0 win against FC St Helens Women in the Women's FA Cup second qualifying round.

Ball only joined North End at the start of this season and has been made an instant impact, one of her noticeable qualities being her deliveries from set pieces.

The playermaker, normally operating in the No.10 position, scored her first goal in Sunday's 6-0 away win on Merseyside.

Speaking after the game, Ball said:“I thought today we were all fantastic. We were first to every ball and won every header, it looked like we wanted it more than them. I think this was the best we have played football-wise all season. As everyone gave 110 per cent, that is why we won the game.”

“It was great to finally get a goal, I am absolutely buzzing. I don't think I have ever got that high up the pitch before and I'm so excited to score in the FA Cup.

“If we play like that, we have always got a chance of getting through to the next round.”

Abbie Jones, meanwhile, got her first start for Preston North End after previously playing and scoring for the development team earlier this season.

Since being involved in the first team and involved off the bench, Jones was on the ball from the first minute against St Helens, causing all sorts of problems and she was delighted to get a goal and assist. 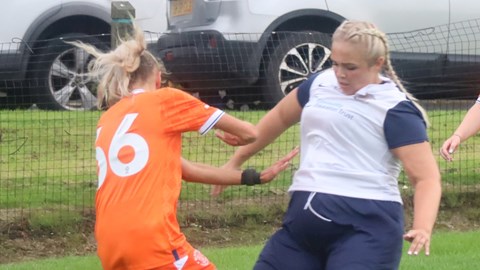 She said: “I think the game today went amazing. Everyone played their part on the pitch and off it and everyone backed each other up. We communicated effectively on the pitch, and everyone was just positive, which is good to see.”

Since playing with the development team, Jones feels she has grown as a player.

She added: “The more time you get on the pitch, the more confident you feel. I am glad that I have played today as well as I did, it's only going to help my confidence.”

Jones, Ball and their team-mates are now preparing for the third qualifying round tie away to Bradford City Women on Sunday 23rd October.