Midfielder Freya Hunt has found her shooting boots of late after scoring three goals in the last three games for Preston North End Women, and she has big aims for the season. 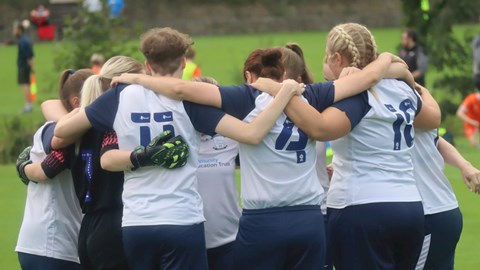 Hunt, who normally plays a more defensive role in midfield, has recently found herself moving up the pitch, giving her more freedom on the field, which was evident in North End’s 3-0 away win against Wyhenshawe Amateurs in the Argyle Cup last weekend.

She was also on the scoresheet against Haslingden in league action, and against Atherton Labernum Rovers in the FA Cup first qualifying round, earlier this month.

Defensively, the Lilywhites have been comfortable recently, with back-to-back clean sheets in the last two games of September, not needing Hunt’s cover in midfield as much so she has been experimenting and testing herself to see what she can do.

Liv Askam also scored a brace the cup tie against Wythenshawe before Hunt’s strike, which came after her two previous goals in the previous games had both been headers.

Hunt said: “We played well, we had a lot of time and space on the ball, the other team didn't cause us any problems and we comfortably dominated the game.

“Liv Askam went through and played the ball to the edge of the box, and I side footed it far into the top left corner.

“I’m happy, I connected well with the pass - perfect from Liv Askam - so all credit to her.

“I am happy to get another goal, I cannot believe it myself if I’m honest. Three goals in three games, I’ve never gone through a season scoring three; never mind so early on!”

The competition North End have for places this term means that players have to perform to their best every week to stay in the starting XI.

Hunt, a PNE fan herself, has noticed that increased competition this season with her’s and her team-mates' aim to put that to use by targeting a league title victory.

She added: “Last season I think we lacked competition but the competition within the team at the moment is good, as now no position is guaranteed.

“I love saying I play for Preston North End and love being part of the club. As it is my childhood club it means a bit more.”

“We want to win the league, I think the team is good enough to play higher and compete. We have recruited some really good players this season and the bond within the team is really good, everyone is pulling towards winning the league.

“A personal aim for me would be to see if we could make it to the first round of the FA Cup and play a good team from the higher leagues and see what we can do.”

North End will travel to Salford City Lionesses in the next round of the competition on Sunday 9th October with a 2pm kick-off.

Before then, they travel to FC St Helens Women, with an FA Cup second qualifying round tie on Sunday 2nd October, also with a 2pm kick-off.