Three goals in eleven first half minutes condemned the youth team to defeat away at Port Vale in their last competitive outing of 2018.

Joe Rodwell-Grant opened the scoring with a quarter of an hour played, but three goals either side of the 30-minute mark saw the hosts take a commanding lead at the interval, with Louis Potts’ reply late in the second half unable to spark a North End fightback.

With Ethan Walker and Jack Baxter on first team duties, the former named on Alex Neil’s substitutes’ bench for the first time, their absence allowed for Rodwell-Grant’s full youth team debut, the U16 having come off the bench a couple of times earlier in the season.

The inclusion of Jimmy Corcoran and Joe Nolan totalled up three changes for the young Lilywhites from facing Bury seven days prior, their rhythm uninterrupted early in this contest after a ten-minute settling-in period, played in the shadow of the hosts’ Vale Park home.

Brian McManus had threatened to give the visitors the lead as early as the first minute, his left-footed drive drifting metres wide from the edge of the box, while Joshua Ede headed over Jackson Wakefield’s centre from a decent position.

McManus showed his passing range when he found Rodwell-Grant in space – a sign of things to come, despite his team-mate being in an offside position – as Corcoran recovered from an under-hit clearance to save Liam Hickson’s instinctive effort.

But the combination of McManus and Rodwell-Grant struck as PNE took a 15th-minute lead. The former’s deft pass was perfectly weighted for the U16 forward to open up his body and place low past goalkeeper Tom Gregors with a neat first-time finish. 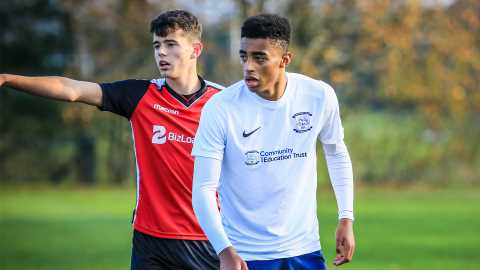 Potts had another side foot attempt in the next attack which might have trumped his team-mate’s opener, thundering against the bar before the linesman rose their flag.

However, the visitors’ play dropped slightly and they were made to pay as Vale had a potent eleven-minute period from 26 minutes onwards.

The equaliser saw Lucas Green-Birch run into the box from midfield and complete a flowing move by lobbing over Corcoran from just inside the box and the hosts were ahead just six minutes later.

Finley Jackson headed over Luke Daley’s free-kick one minute thereafter before Vale’s 37th-minute third arrived, via Maxwell Chimenes, who tucked in from close range after a left-wing delivery rebounded into his path.

North End rallied to get back into the game, Rodwell-Grant draving a smart save from Gregors moments before half-time, at which time fellow sub-scholar age players Lewis Coulton and Aaron Bennett were introduced to the action.

The latter’s header was cleared off the line inside the opening moments of the second half while Corcoran dived to his right to deny Green-Birch from a corner, after Wakefield’s attempt deflected behind.

PNE had the better of the play late on as Pollard’s wickedly delivered corner was punched clear and Bennett’s teasing cross rebounded off the post.

There was some reward as Potts converted Coulton’s low cross with nine minutes remaining, and substitute Tyler Williams headed wide a chance to equalise from a late corner.

North End ultimately left frosty Stoke-on-Trent without the points but Academy manager Nick Harrison highlighted a number of positives to be taken from the morning’s work.

“Overall, it was a great effort with a really young team out today,” Nick told the club website. “We finished even younger in the second half and we’re missing a few of our key players, which I felt told.

“The game might’ve been different if they were involved. But we’re missing them because two are with the first team squad and we’ve got a few injuries as well with others.

“I thought we made a great start and Joe Rodwell-Grant’s goal was very good. We then had a 10-15 minute spell where we started to sit off and allowed Port Vale to play, and that’s not the way we play. Unfortunately, we paid the price and conceded three quick goals, which isn’t good enough.

“What was great, though, was to see the changes in the second half, a 14-year-old and 15-year-old player [Aaron Bennett, Lewis Coulton respectively], both contribute to the second half. I think we were a bit unlucky not to draw or even win the game in the end.”

Expanding on that point, Nick spoke on Aaron Bennett’s encouraging display in the second half, while singling out one of his more experienced players for praise, too.

“We’re gutted to have lost the game but pleased with the performance and certainly some individual performances as well.

“Aaron is 14-years-old, had one cleared off the line, another hit the bar and I think he could’ve scored another, too. He’s had a real impact and it doesn’t matter how old you are, that’s what we want to see. It’s pleasing to give him that opportunity.

“I also thought Jack Armer was outstanding at centre half, captaining the team. He played on the front foot, talked to the younger players and that’s what we want to see in a player’s development as well; we want to see him develop as a person and become a leader, so I think he did really well.”