The Lilywhites extended their unbeaten run to five games with another excellent away performance, defeating Burton Albion 2-1 at the Pirelli Stadium.

Skipper Tom Clarke scored on his second consecutive start, from close range, before substitute Daryl Horgan grabbed his first of the season to double the lead.

Lucas Akins bundled home a late injury time consolation for the Brewers, but the game ended with the North End fans singing ‘Jingle Bells’ to serenade their heroes off the field after another entertaining display.

It was no more than Alex Neil’s men deserved and, in fact, had it not been for the performance of the home side’s veteran goalkeeper Stephen Bywater, the deficit could have been much bigger, making four great saves, as well as hitting the woodwork twice.

It was an unchanged side from the one that beat Queens Park Rangers the previous week, but this time captain Clarke was operating at right back, just as he had on at the same ground on the opening game of 2017 - when he scored the only goal of the game, with Darnell Fisher switching across to play on the left side of the defence. 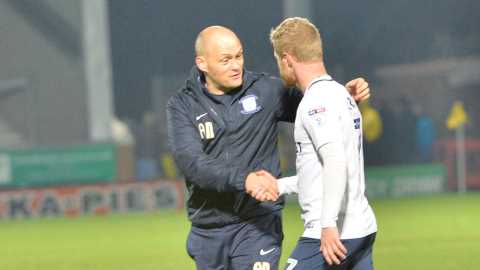 However, it was almost a start to forget, when Chris Maxwell was dragged out from his goal to the right hand touchline, but was beaten in a tackle by Akins, the former Tranmere Rovers forward swinging over an effort that luckily for PNE ended up in the side-netting in front of the PNE fans in the packed away end behind the goal.

But from that point on, the chances came on a regular basis for the visitors. Just before the quart hour mark a left wing corner from Paul Gallagher was played out to the edge of the ‘D’ to Ben Pearson, who brought the ball down and hit a half volley that dipped just over the cross bar.

The first stunning save of the afternoon from the Albion keeper came mid-way through the opening period when the ball was worked to Fisher 25 yards out and he whipped a superb effort that curled and arrowed towards the top right hand corner until the stopper tipped the ball around the post for another corner, denying the No.14 his first goal in lilywhites.

Bywater was beaten four minutes before the break, but his captain Lewis Buxton was on hand to save him. The ball had been worked through the box by Gallagher and Tom Barkhuizen and found its way to Callum Robinson on the right hand edge and he drilled a ball goalwards, until the yellow-clad captain sliced the ball off the line.

After the interval the pressure became more incessant, Robinson seeing another shot blocked, this time by Luke Murphy, after ghosting past two defenders as he drove across the box, but two substitutions by the North End boss changed the game.

Jordan Hugill and Alan Browne were withdrawn, with Josh Harrop and Horgan thrown into the mix; with Tom Barkhuizen moving into the front man’s position and this proved pivotal. By putting the pacy No.29 into the attacking role it forced the home defence to drop deeper, leaving space for the likes of Harrop, Gallagher and the two wide men room to play and run at the Brewers.

And it didn’t take long for this to happen, as Irishman Horgan collected the ball on 64 minutes and put over an excellent ball from the left hand side that found Barkhuizen unmarked ten yards out, but he pulled his volley to the left of the posts.

The No.7 continued to impress after his introduction as he collected Barkhuizen’s pass to race down the left flank, before driving into the box and firing a shot on target that was blocked for a corner.

And from that cross the opening goal came.

Hard Work Paying Off For Clarke

The captain ran off to celebrate with the North End fans, with the entire team heading to congratulate him, with his first goal after seven and a half months on the sidelines.

After the goal Nigel Clough’s side had their best spell of the game, Maxwell forced to make a fine save to tip a free kick from Matty Palmer over the bar and then shortly after doing the same to deny Akins, whose header from 15 yards out was on target.

But as they pressed forward, chances began to open up at the other end for the Lilywhites. With 12 minutes to go, Horgan picked up the ball in his own half and ran straight at the heart of the Burton backline, carving a whole straight down the middle, getting himself one-on-one with Bywater, but the keeper did very well to stay up and got a right hand up to turn the ball away – a brilliant stop.

The post was next to deny PNE, Robinson and Harrop having worked the ball with some excellent quick one-touch passing down the right, before the latter pulled the ball back to Gallagher on the edge of the box. He controlled and fired goalwards, but against the outside of the left hand post.

But with seven minutes to go the second goal of the game came and gave the away side the points. Gallagher and Barkhuizen were again involved with the former Morecambe man getting a shot away that deflected into the path of Horgan in the left hand corner of the box and he fored a curling effort back into the bottom right hand corner to send the away fans into raptures.

The whites were now playing ole football, with some thrilling stuff. A Barkhuizen back heel to Harrop created a chance, but the No.10’s shot came back off Buxton and out for a corner. From the corner Robinson was found by a brilliant Gallagher pass and Bywater made yet another superb save.

And Robinson knew it was not going to be his afternoon in front of goal in the final minute of regular time as once again Gallagher and Barkhuizen combined down the right to play in the former Villa man, who checked onto his left foot and fired goalwards, beating Bywater, but coming back off the foot of the right hand post.

In the second of two minutes added on for stoppages the home side scored a consolation, when a Palmer corner from the right hand side was crossed into the box and out to the back post and the ball was poked home off the underside of the bar by Akins, but this was no more than a mere blot on an otherwise perfect away performance to make it three wins from the last four games.