Preston North End manager Alex Neil believes his counterpart at The Den has done an excellent job since taking over.

13 February 2020
The former Derby County manager, who has former PNE skipper and fan favourite Callum Davidson on his coaching staff, has got the Lions on an upward curve and the Lilywhites gaffer is expecting a very tough game at Deepdale this Saturday afternoon.
“They have done great,” Alex told iFollow PNE. “They have gone in and probably brought fresh ideas in. Neil [Harris] had been there for a quite a number of years and he has moved on to pasture new and is doing great with Cardiff as well.
“And I think that Gary is enjoying it. I have spoken to him a couple of times since he has been there and he enjoying working with that squad.
“They are a hard-working, honest squad and he has certainly seems to be getting the most out of them at the moment.
“[Connor] Mahoney and [Jon Dadi] Bodvarson and guys like that have added to them. They have got a bit of everything – they have size and power to turn it, they have got guys who can take it and dribble past you, they have good technical players in the middle of the pitch, they have good energy – the boy [Jayson] Molumby – who they took from Brighton – has done particular well for them as well, so they are a difficult team.

“It has always been tightly contested, games between Millwall and us, and they are not an easy team to play against.

13 February 2020
“Jed [Wallace] has been doing great for two or three seasons, but this is probably the best he has been, however, for the last couple of seasons, every time we have done to Millwall, we have highlighted him as a real threat, so that has not really changed. He has probably matured a bit more and he is impacting games on a regular basis. He will be really pleased with his form and we know the threat that he brings and will have to cope with that and try and cause problems going the other way.
“They are well-organised and Gary has added layers to them in terms of having a different shape that they can alternate to, which they didn’t have before, and I have seen them hunt the ball higher up the pitch, I have see them sit in their shape.
“This is a game is a game where we will probably have to just focus on how we are going to play and perform; we will be aware of the threats from Millwall and do our best to cope with that.”
The team return to Deepdale after a brace of away victories and the boss is looking for his side to maintain their record off having the best home for in the division.
“Our home form has been really good this year,” he continued. “We had a wee blip when we lost a couple of games in a row, but other than that we still have the best home record in the league, but it is going to be tough.

“We are at that stage of the season where this is the third game in a week, having already had two tough away games and this is the one we have to try and get over and try and get the points before we have a week to prepare for the next one. 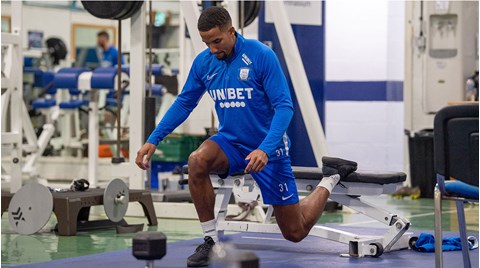 Scott Sinclair Getting Up To Speed

13 February 2020
“I always stated, from the start of the season, that from January onwards, it was really important and to be fair to the lads, since that period has kicked in, we have lifted it another gear in terms of the determination, the hunger and the drive that we need to make sure we stay in the hunt, so this game is really important.”
It is also the third game in eight days and this could mean squad rotation, but as Alex points out, it is the same for both teams.
“Millwall will be in the same boat. They will be looking and asking ‘do we need to freshen it up a little bit?’. They’ll look at whether they have any knocks and niggles and we need to take the same things into account.
“What I do know, is that whoever takes the pitch for us, they will do their utmost to try and win the game.
“Right throughout the season, whether we have been in good form or bad form, the boys have worked as hard as they possibly can and it has certainly not been through lack of effort that we haven’t won games.
“If we can keep that going between now and the end of the season, we will see where it takes us, but to this point, the boys have done remarkably well,” he added.