Preston North End manager Alex Neil has enjoyed having ten days to prepare for what is a huge month in the EFL Championship.

30 January 2020
The Lilywhites have seven games in February, starting against Swansea City at Deepdale on the 1st of the month this Saturday afternoon, and he is hoping to continue the recent form.
By the time the month comes to end, after the clash with Fulham on Saturday 29th, there will just be ten games of the season to go and the Lilywhites’ gaffer is looking forward to the challenge.
“It is a big month,” he told iFollow PNE. “But equally, we have been in and around it since the start of the season and we want to make sure that at the end of the month, we are still there.

“Any team that can put a good run together now is going to give themselves a great chance and we hope that is going to be us.”

30 January 2020
The side go into the clash with Steve Cooper’s Swans following back-to-back wins and he has been grateful of the extra preparation time.
“It is always nice to come off the back of a couple of good results; particularly where you have a few spare days in there to prepare for the next one,” continued Alex.
“The atmosphere off the back of that has been good and everyone is up for this game, which is going to be a big one.
“I have seen quite a bit of Swansea, but it was good to see then live last weekend at Stoke. They have brought in Gallagher and the left-sided centre back from Chelsea, but the way they play remains the same, it is just different personnel in those positions.
“It was interesting to have a look at them first hand, which was good and now we can ourselves prepped and ready for this one.
“Most teams have slight alterations [in the way they play] as the season develops, as there are always things you want to improve on, so they are slightly different from when we played them in August, but it is not wholesale changes.
“As a coach you generally go back to what you know and Steve has brought in some players he has worked with before for England.

“They are dangerous team, have some good players and we know it is going to be a tough game. We just need to go and play as well as we can, we have a good home record this season and we want to continue that.” 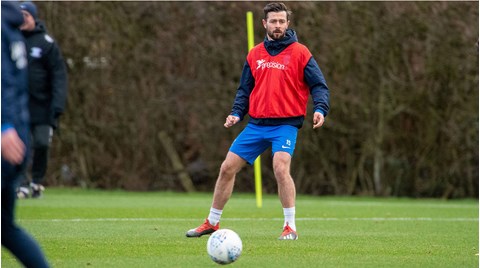 Joe Rafferty Ready To Take On His Past

30 January 2020
And the extra period since the Barnsley game has also helped in terms of the options available to the PNE boss: “Most of the illness we had in the camp has cleared out now. We had a game earlier in the week, which was good for some of the lads to get minutes to sharpen up for this period coming up.
“We go into this one in good shape. It will help Scott [Sinclair] as well, getting another week’s training under his belt and we should be in good nick.
“With any player you bring in, if they haven’t been playing, then naturally, they don’t have that match sharpness – regardless of how much training or running you do.
“You just need to play matches to get that and Scott has now got two and a bit games in and he will improve game by game.
“We go into this game confident and looking to build on what we have done over the last couple of weeks,” he added.