Alex Neil said seeing his side have back-to-back penalty kicks saved summed up their day as the Lilywhites lost 4-0 to Cardiff City in the Welsh capital.

Alex Neil said seeing his side have back-to-back penalty kicks saved summed up their day as the Lilywhites lost 4-0 to Cardiff City in the Welsh capital.

Goals within two minutes of kick-off in both halves through Kieffer Moore’s spot kick and Josh Murphy’s finish saw the hosts take control, before Paul Gallagher and Ched Evans had their own efforts from 12 yards saved in consecutive minutes, just after the hour mark. 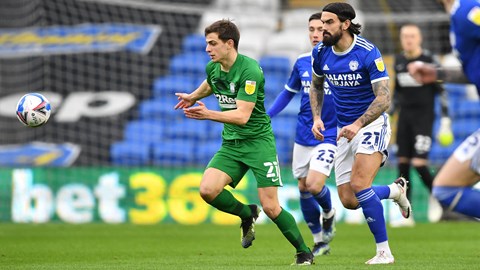 Speaking of his side’s display at the Cardiff City Stadium, Alex told iFollow PNE that there were too many mistakes on show from his team.

“We made too many errors,” said the gaffer. “The first goal, we try to play a backwards pass. We then kick it out for a throw-in, don’t defend the throw-in, give a penalty away within the first minute.

“We made it really difficult, I didn’t think we started the game well – too many misplaced passes. And then I thought probably about midway through the first half until about half-time, I thought we controlled the ball but weren’t inventive enough with our passing, didn’t play forwards enough. We controlled the game without any real threat.

“At half-time, we spoke about the bits we wanted to do better but we just shot ourselves in the foot. We talk about being positive, putting the ball forward, trying to play more forward passes; we take centre and play it back to the centre back. Two passes later, we’re 2-0 down.”

Gallagher was introduced alongside Anthony Gordon on the hour mark and the manager spoke of the pair’s impact to win North End’s two penalties.

“I thought Gally and Anthony Gordon coming on gave us a bit of an impetus, I thought they looked good and moved the ball well, we looked more dangerous. Anthony gets a penalty, which isn’t a penalty, Gally misses it, which is highly unusual.

“We then get the next penalty, Ched then misses it, and I think to be honest, that sort of summed us up today in terms of having good opportunities, not taking them, making bad decisions. And the bad decisions we did make ended up in goals.

“I think the third one is a clash between the centre back and goalkeeper, it’s a simple ball in behind. Then the fourth one, we play a short back pass and they nick it. It’s unusual to say the least and I think that’s a harsh lesson for us today in terms of doing the basics really well at this level to get the results because we didn’t do that anywhere near well enough.”

Alex felt that the scoreline was harsh, but that lessons must be learnt by his side from this afternoon’s display, and agreed that Wednesday night’s fixture at home to Queens Park Rangers must be used as an opportunity to bounce back.

“When you play well, and I’ve been there as a player, you expect all the plaudits will come your way. When you make bad decisions, naturally, it’s going to get highlighted. It’s a sore one today for everybody.

“I’ve been involved in football all my life and that certainly didn’t feel like a 4-0 – it’s a strange, strange game – and that’s the scoreline and that’s hard to accept.

“That’s what we need to do, there’s no qualms about that,” he added, when asked about using QPR’s midweek visit as a motivator. “We need to start picking up some more points.”

Watch Alex’s post-match thoughts in full by clicking on the video above.