Preston North End host a second Lancashire derby of the month on Monday night when Blackburn Rovers come to Deepdale.

Tickets for this fixture will remain on sale right up until kick-off from the Deepdale ticket office during opening hours, while tickets can be bought 24/7 from www.mypne.com.

Our fan zone will be open to home supporters from 4.45pm, with live music and refreshments on offer. The fan zone will then reopen after the game, with a half-price offer on our selection of Bowland Brewery cask ales.

PNE U19s will be presented with their trophy on the pitch at half-time of this fixture, after recently being crowned champions of the Youth Alliance North West Conference.

With this game being shown live on Sky Sports, supporters worldwide are unable to watch the match on iFollow PNE. Fans are advised to check their local listings to see whether they can watch the game in their area.

Live commentary on iFollow is available as usual though, with a match pass costing just £2.50, which you can subscribe to here! 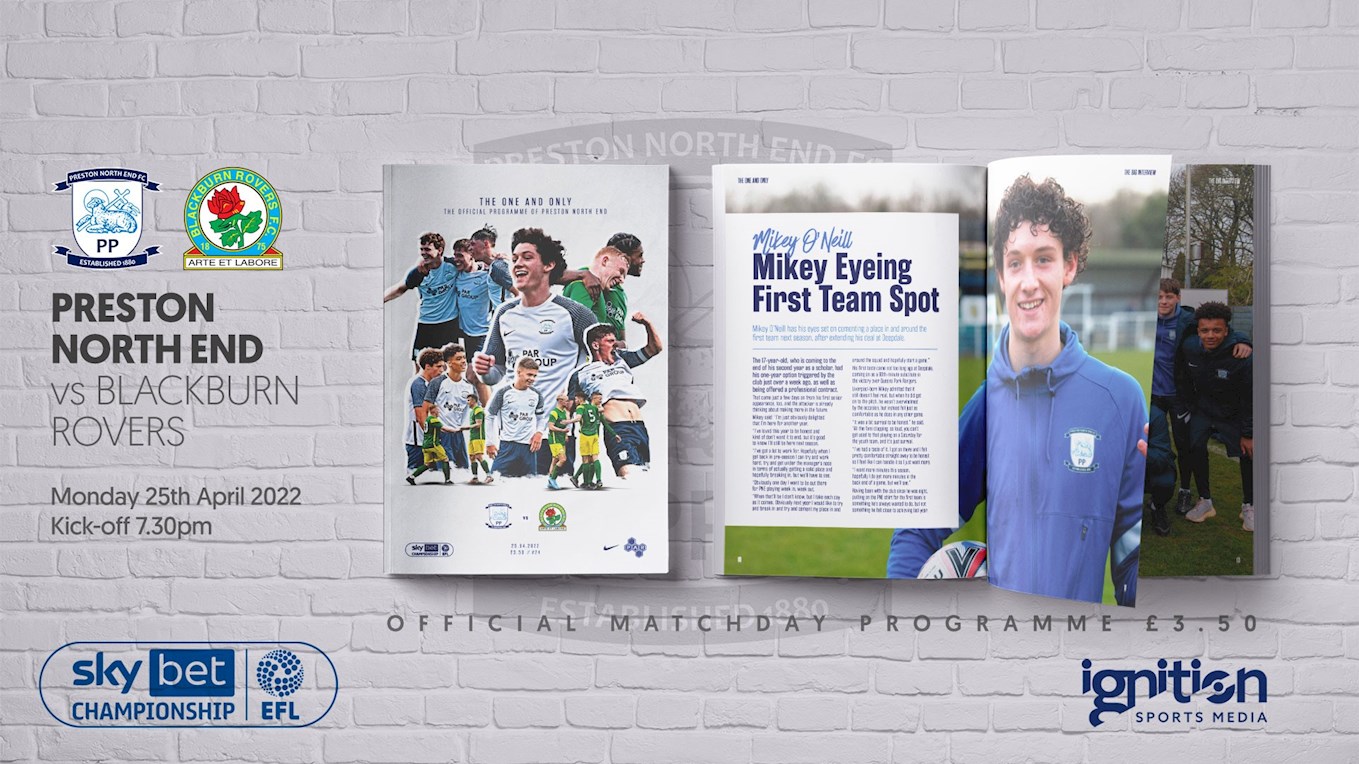 Our U19s take centre stage on the cover of Monday night's The One And Only following their league title victory!

In the latest edition of our matchday programme, we have interviews with Aaron Bennett and Mikey O'Neill - who have both extended their stays with the clubs.

Programmes can be bought from around the ground on Monday night for £3.50, or you can order straight to your home by clicking here.

Skipper Alan Browne and striker Emil Riis, who both missed the trip to Fulham through injury, are on the grass but will need to be assessed ahead of this fixture.

Ched Evans is also a doubt, having been forced off at Craven Cottage with a toe ligament injury.

Patrick Bauer missed out through an Achilles problem, but the defender should be in contention on Monday night. 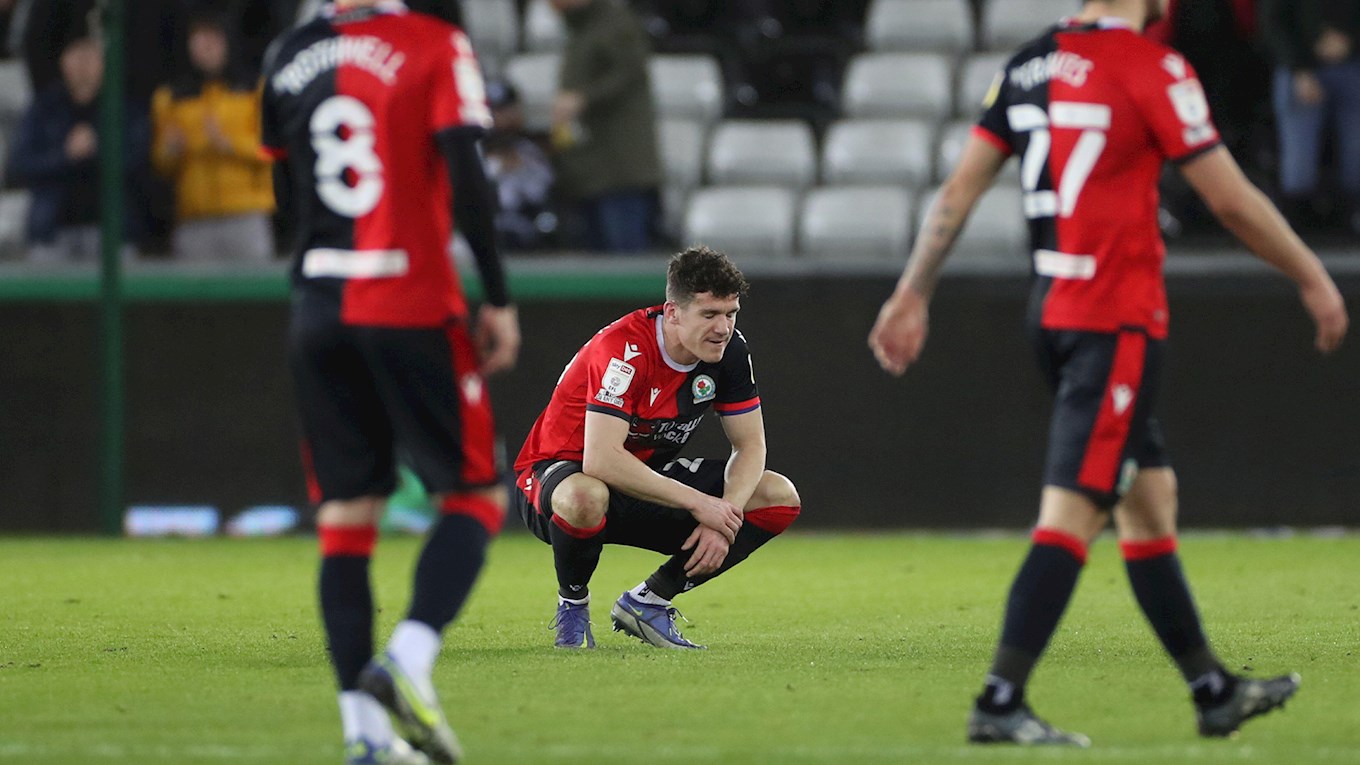 After a strong first half to the season, Rovers appeared well in the race for automatic promotion, but their attempts have slowed down in recent matches.

Two victories in their last 15 games has seen them drop out of the Play-Off spots and, with everybody else playing before Monday evening, they could arrive at Deepdale six points away from sixth place if results don't go in their favour.

Defender Tayo Edun will be back in contention for this fixture after serving a suspension last week, while Tony Mowbray is hopeful of being able to call upon Bradley Dack who was injured in the half-time warm-up last Monday.

Ben Brereton Diaz, now a regular for Chile, is responsible for scoring almost 40% of Rovers’ goals this season, having netted 21 in the Championship.

Most of Blackburn’s points this term have come at Ewood Park, with Tony Mowbray’s side arriving at Deepdale winless in their previous nine away fixtures.

Three points for PNE would see them reach their final points tally (61) from the 2020/21 campaign, with two games to go.

PNE's last three points against Rovers came at Ewood Park in February 2021, as a stunning opener from Greg Cunningham followed by Liam Lindsay's first goal for the club was enough to earn the three points, despite Adam Armstrong's goal from the penalty spot.

Jeremy Simpson is the man with the whistle for Monday night’s Lancashire derby.

Simpson has taken charge of two PNE games so far this season, with the most recent being the away victory at Stoke City in January, while he has refereed 16 North End matches in his career.

He has officiated 32 games this term, showing 122 yellow cards and seven reds, including two sendings off in his last three matches.

The visitors rushed into a two-goal lead, with Sam Gallagher and John Buckley on the scoresheet inside 12 minutes, before Browne pulled one back just before the half-hour mark.

Darragh Lenihan and Lewis Travis then extended Rovers’ lead with goals either side of half-time to earn them the three points.

It was first blood to the visitors within the first nine minutes, as a free-kick from the left was headed against the post by Ben Brereton Diaz, before the ball fell kindly for Gallagher who headed home from close range.

They soon had a second, too, with Buckley being allowed room in midfield and he chose to shoot, beating Iversen with a low strike from 25 yards.

North End halved the deficit just short of the half-hour mark, as Greg Cunningham made great progress in the Rovers half before finding skipper Browne, who saw his goalwards shot deflect off a defender and into the back of the net.

The visitors regained their two-goal advantage eight minutes later, as Joe Rothwell chipped a free-kick towards the far post and Lenihan rose highest to loop a header back across goal and into the right-hand corner.

At the other end, Thomas Kaminski was forced into a smart reflex save to tip over a clearance from team-mate Travis, who made it four shortly into the second period, finding the bottom corner from just inside the area.

PNE so nearly drew a goal back on 59 minutes, as Patrick Bauer saw a header blocked by Cameron Archer, and the ball fell to Emil Riis who struck a low shot towards goal, which Kaminski kept out with his right boot.

Iversen was soon called into action to deny Rovers another goal, saving with his feet from Gallagher, and Brereton Diaz then saw a header bounce off the top of the crossbar, but Rovers held on to their lead to seal victory.