Ethan Walker was announced as the Preston North End Scholar of the Year on Tuesday evening – a title which the young forward is very proud of. 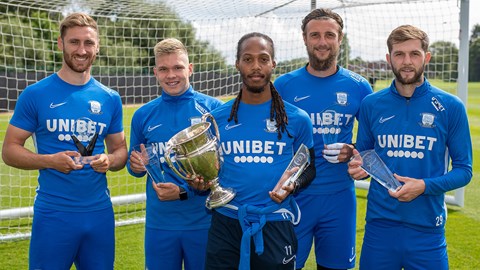 The Preston-born attacker has been with the club since U9 level and with past winners including Ben Davies, it’s an award which recognises a lot of individual promise.

“It was a great accomplishment for me,” Ethan told iFollow PNE. “Especially coming up through the Academy and being in the youth team for quite a few years, it was kind of like the icing on the cake to finish off my last year as a scholar.”

“It was a massive achievement for myself and something that I can put in the trophy cabinet for now, my first trophy of hopefully many.”

Walker has been a standout player for the youth team in recent years and those performances helped him receive a call-up to the first team to work under Alex Neil who gave him his debut back in December 2018 against Aston Villa.

That appearance put Ethan’s name into the history books as the youngest ever player to represent PNE in a league fixture, but the winger is content just to be training with the first team squad.

He said: “You grow up in the Academy being a little fish in a big pond to leaving the Academy as a big fish in a little pond, so you leave your scholarship on a high and for me I did sign my professional contract which was another high, but you just have to start again.

“It’s just like the Academy process all over again, so you’ve just got to learn and move on, but I just appreciate being in training all day and learning off some of the great players that are there.

“I don’t sulk or moan that I’m not involved in the squad or anything like that. I’m just appreciative that I’m in and around the squad and I’m training every day, so it’s a bonus for me.”

Ethan was used once off the bench this season in the Carabao Cup tie against Bradford City and he tasted more experience of playing alongside his team-mates in the games PNE played against Wigan Athletic and Burnley prior to football’s restart.

“There’s been games in the past that we had the friendlies that we play at the training ground and every game I play in is an experience, especially playing with the first team.

“So, when I got the chance to play against Burnley and a few minutes against Wigan, it’s just another step on the ladder to hopefully get some more game time in the future.

“I appreciate getting the time and trying to put myself out there to see if I am good enough yet. I’ve just got to be patient and keep on going really.”

Ethan did spend part of the campaign out on loan with Stalybridge Celtic, but has been back with PNE since football returned from lockdown and he’s noticed the group has grown stronger amid the circumstances.

He told us: “The times that have happened with coronavirus and not having the fans there to support the team and push them on, I think it has made the team a little bit closer in that sense.

“For myself, as well, I obviously didn’t travel to every game, or wasn’t in the squad on the bench or anything like that, but it’s just the morale of the club and being there, supporting them to go the extra mile to do the stuff in training and if they need some crossing or some extra finishing then I’m there to do my part of helping them better themselves.”