There are just seven games to go and two points cover six teams chasing two Play-Off positions, with Monday a chance to put down a marker for both teams, knowing that with fixtures elsewhere, a win meaning they are likely to go into the final half dozen games in the top six.

It’s also Retro Day in PR1, a fan led event, with supporters wearing their old kits from bygone eras to show their colours for the team, with a couple of extra former players in attendance to add to the flavour – with both Chris Sedgwick and Chris Lucketti, who were part of the side that defeated the Rams in the 2005 Play-Off semi-finals set to be on the pitch at half-time.

For both teams, they come into the game on the back of defeats on Good Friday and will be wanting for a reaction to those reversals as they face off in front of a bumper bank holiday crowd.

Ref Watch
Making his second visit to Deepdale this season, but his first since our opening day fixture, is match official Tony Harrington…

Stat Attack
For the fourth and final time this season, we welcome a fellow founder member of the Football League back to Deepdale…

Match Coverage
On Monday lunchtime, the game is live on Sky Sports in the UK, meaning we cannot broadcast the game live in the majority of regions… 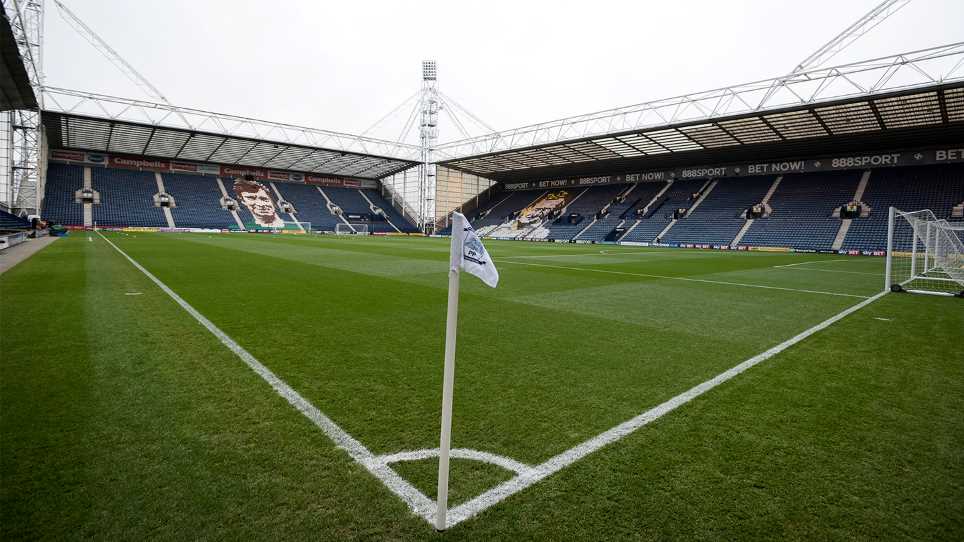 A second half free kick from Tom Lawrence was enough to take the points for Derby County at Deepdale.

The Lilywhites missed a chance to go in ahead at the break when Alan Browne found the outside of the post with a penalty he himself had won and despite having 20 shots to the visitors two in the game, it was the Rams who solidified their place in the Play-Off positions.

Two changes were made to the side that had faced Sheffield Wednesday on Good Friday; Chris Maxwell and Greg Cunningham in for Declan Rudd and Josh Earl and it was Alex Neil’s side that dominated from the off.

Chances came at regular intervals for the Lilywhites. Firstly Paul Gallagher saw a shot deflected behind off Tom Huddlestone for a corner and then Browne burst his way through four or five players into the box before his driven shot was blocked for a corner by Alex Pearce.

Just before the half hour mark Sean Maguire played the ball into Callum Robinson around the penalty spot, and the No.37 spun and shot which came off Pearce and out for another corner. And moments later Robinson was denied again as his was shot saved by the legs of Scott Carson when he had been sent through by a Browne hooked pass down the right hand channel.

But with nine minutes to go before the interval there was a key moment in the game as Browne was adjudged to have been brought down in the left hand edge of the box by Andre Wisdom, referee Tony Harrington pointing straight to the penalty spot.

The No.8 dusted himself down and placed the ball, but after a long delay he dragged his shot against the outside of the left hand post.

The home side didn’t let their heads drop, however and had another good chance to take the lead before half-time. Robinson collected from Maguire on the left, drove inside to left hand corner of the box and dragged a shot an inch wide of the right hand post with Carson beaten.

After the interval, the visitors took the lead completely against the run of play. A free kick was awarded for a foul on former PNE striker David Nugent by Tom Barkhuizen and Lawrence’s free kick from 30 yards on a left hand channel went past the wall and into bottom right hand corner, with Maxwell getting a hand to the ball, but unable to keep it out.

It was still North End who were the only team looking to attack. With 20 minutes to go a Gallagher free kick from the right fell to Paul Huntington 15 yards out, but his volley was over the bar.

And it was the same story 15 minutes later when a ball in from substitute Billy Bodin was headed down to Gallagher, but he could only fire over the bar with his left foot.

Bodin himself had a snap shot from 22 yards into the final five minutes, but Carson saved well and held at the second attempt as the visitors held on for the win.

Normal matchday prices apply for Monday lunchtime’s clash with Gary Rowett’s Derby County at Deepdale, with tickets on general sale for all areas.

Tickets can be purchased at Deepdale from 9am until 5pm on Saturday, the ticket office is shut on Easter Sunday, but reopens from 8am until kick-off on the day of the game, both in person and over the ticket hotline – 0344 856 1966.

Away end tickets will be available on the afternoon, with no increases for matchday purchases. Visiting Rams supporters can buy from the away ticket office next to the Bill Shankly Kop on Lowthorpe Road, with cash and card payments accepted.

For home fans travelling to the game, there is a reminder that Moor Park School car park is no longer available. The Leyland shuttle bus continues its new route.