A number of councillors and staff from Preston City Council teamed up with the Trust to deliver Festive Hampers to those most in need over the festive season.

The Trust set-up the initiative to support the elderly and vulnerable and received donations from the general public, the club and members of the first team squad to fund the items within and delivery of the Festive Hampers.

Hampers reached people from across Preston, thanks to deliveries being made from PNECET staff, PC Paul Elliott, and councillors and staff members from Preston City Council.

Among those was Councillor Naweeda Khan, a representative of the Plungington ward of Preston. 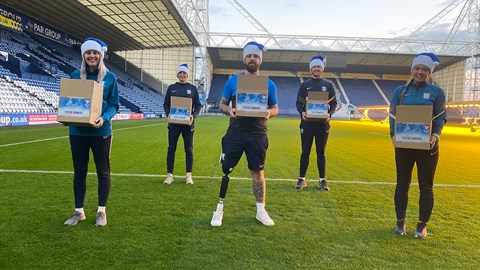 “Due to the pandemic, there’s been a rise in the need for various types of support for families in the community. This partnership is very, very important indeed.

“Having these Hampers at this time, at Christmas, is very important and I think it’s been really accepted and valuable to the community, especially those that are really affected.

“The areas we are targeting or we are working with to support those families where the Hampers are going, we’ve worked with the schools to identify particular families in need and this is where those hampers will go.

“It is those families in greatest need and some of those won’t come forward. It’s also about their own dignity, and we accept that. But us going out to them and giving these Hampers will really be a great contribution.”

Community Engagement Officer for the council, Vicky Fletcher, spoke of her experiences delivering the Hampers, and the importance of the support of Preston North End.

“As a council, we can’t do this on our own, so by working in partnership with Preston North End and the various food providers across the city, it goes back to maximising those opportunities to enhance the offer that we provide the local community.

“I’ve been out and about delivering parcels, leaflets which inform families around access to food over the Christmas period, including all the food banks and hubs that are operating throughout Preston.”