Former Preston North End Community and Education Trust student Adam Wreford has credited the diploma in sport he achieved from the Trust as having a major role in helping him to set up an online futsal programme earlier this year.

Adam studied with PNECET from 2015 to 2017, achieveing a Level 3 diploma, before moving onto study Sports Management and Coaching at Edge Hill University – graduating with an upper second class degree this summer.

Having worked on a number of PNECET programmes, including as a matchday assistant, Adam went onto become a paid casual coach with the Trust and using that experience, he has now set up ‘Futsactive’, an online-based futsal training platform. 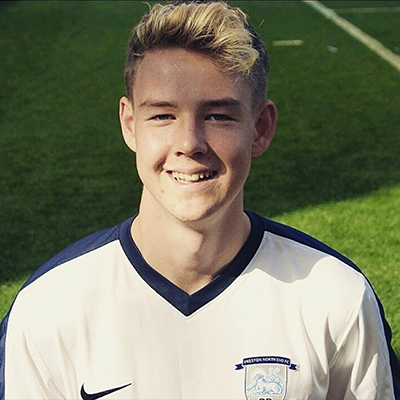 He has used the skills he developed at Preston North End, both on the education programme itself and while out in the community as a casual coach, to establish Futsactive, which is providing video tips for young people interested in futsal.

The 21-year-old initially became interested in futsal having played the sport as part of his studies at PNECET, and he maintained that interest while at university.

Originally from Ipswich, Adam moved to stay with family in Preston when enrolling on the diploma in sport, and reflecting on his studies, he said: “It was perfect because I’m into sport and I was looking for a sports course – I was initially going to do A Levels.

“The staff and students alike made me feel really comfortable in moving there and it was like-minded people as well; studying with people who had the same interests.

“We got to do lots of different units, like psychology that I was interested in, other than just playing football. It was really good in helping my development, improving my confidence to then go onto university and move away again.

“It has really helped me in terms of my confidence and setting Futsactive up as well, giving me the skills that I managed to develop at university.”

Adam retains aspirations of working full-time in the sports industry in the future and has an extensive amount of experience in coaching with Preston North End to accompany his recently acquired degree.

“I’ve managed to do some casual coaching at North End on programmes like NCS, PL Primary Stars, PL Kicks and walking football. Working with different age groups has helped me to develop as a person.

“I’ve worked on matchdays which is a really fun opportunity to go out onto the pitch at half-time and work with all the young people.”

On his Futsactive initiative, Adam added: “It has mainly been videos with tutorials of different drills that you can do from home.

“I’ve been doing little drills and things in the garden in really small areas so people could do it wherever they were during lockdown.

“That’s how it came about, through being interested by the time that we spent at Preston North End.”

Now in partnership with Preston’s College as part of Preston’s Centre of Sporting Excellence, PNECET continues to offer diploma in sport courses at Level one, two and three for 16 to 19-year-olds in Preston.

Students can access unique work experience opportunities in the sports industry and represent both organisations in the EFL Community and Education Football Alliance league against other clubs.

Check out the Futsactive page by clicking here.

There are still places to join for the 2020/21 academic year and prospective students can register their interest by visiting PNE.Com/NewStudent or emailing Graeme@pne.com.