Preston North End Community and Education Trust has been shortlisted for two awards at the 2020 Pitching In North West Football Awards. 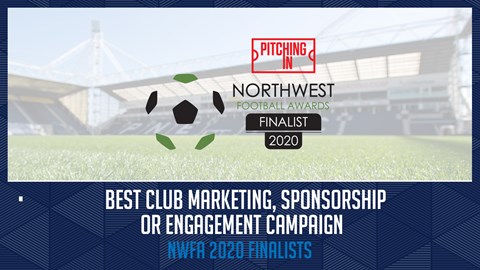 Where In The World Campaign Shortlisted For North West Football Awards

The Community Club of the Season award sees the club and PNECET recognised for its overall contribution to supporting the wider Preston community, particularly throughout the Covid-19 pandemic, with the club and the community working in partnership on numerous initiatives.

One such initiative, the PNECET Helping Hampers campaign, has been recognised in the Community Initiative of the Season category.

The joint club and community initiative took place over 12 weeks at the height of lockdown, with 1,300 food hampers delivered to vulnerable members of the community, including season ticket holders, members of community programmes and others who had been referred to the programme, having been recognised as someone in need.

The initiative was supported by the first team squad and management with messages of support on social media and thousands of pounds in funding, while owner’s representative Peter Ridsdale also joined the campaign to support the packing and delivery of hampers.

Preston North End is shortlisted in five different categories overall for the 2020 North West Football Awards, with Daniel Johnson in the Championship Player of the Season, Josh Harrop in the Athletic Rising Star of the Season, and the Where In The World #PNEAtHome campaign in partnership FCI Markets in the Best Club Marketing, Sponsorship or Engagement Campaign, all included as finalists in their respective categories!